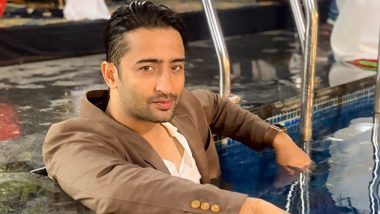 Only a few days back, it was reported that Star Plus' Yeh Rishta Kya Kehlata Hai spin-off, Yeh Rishtey Hain Pyaar Ke which stars Shaheer Sheikh and Rhea Sharma in the lead roles, was going to go off air with Saath Nibhaana Saathiya 2 taking over the show's 9 pm slot. The news came as a shock to the show fans with them taking to twitter, to demand an extension for the show. However, looks like the show will be ending soon and making way for SNS 2. Yeh Rishtey Hain Pyaar Ke To Go Off-Air, Saath Nibhaana Saathiya To Replace the Shaheer Sheikh - Rhea Sharma Show.

However, in a conversation with BT, he revealed, "Although I knew that the show was not doing well number wise, I didn’t know that it might come to an end so soon. However, generally, also I do shows for not more than a year and this show ran for more than year. I like doing stories with a definite start and end." Shaheer Sheikh - Rhea Sharma Starrer Yeh Rishtey Hain Pyaar Ke Completes 300 Episodes (View Post).

He continued, "I personally feel that a year is enough for a show and beyond that the premise of the show is lost and then they are dragged. I would not ever want to be a part of an infinite show. This show also, I had signed for a year only but then later Rajan sir (Shahi, the producer of the show) convinced me to stay for two years to which I agreed. He is a great person, who understands his actors a lot. But I would not want to give more than a year to a show on TV otherwise." Shaheer Sheikh Opens Up On Shooting For Yeh Rishtey Hain Pyaar Ke Amid COVID-19, Reveals He Was Initially Hesitant.

When quizzed about what he wants to do next, Shaheer revealed, "I would love to play a cop or do a negative character and have been wanting to do that for long. There is so much now to do even on the OTT platform. But yes I would not do something that I can not watch with my family.”

(The above story first appeared on LatestLY on Sep 21, 2020 08:35 PM IST. For more news and updates on politics, world, sports, entertainment and lifestyle, log on to our website latestly.com).