The Kapil Sharma Show Host Kapil Sharma Expresses His Desire to Do Other Roles Than Comic Ones, Reveals He Started His Career With Serious Roles in Theatre 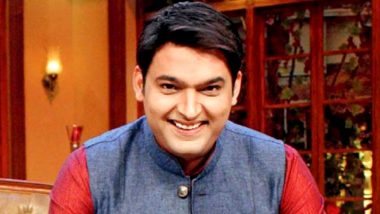 Well, looks like India's funny man Kapil Sharma, who visits us all via TV every weekend and entertains us without fail with The Kapil Sharma Show, is not all about comedy only. Even though it was that genre that put him on the map and in today's time, he is one of the most successful comedians in the country, there was a time in his life when Kapil was all about serious roles. And in his own admission, Kapil Sharma reveals that he wants to do films with serious roles and not just comic ones. The Kapil Sharma Show: Here's How Kapil Sharma Maintains Social Distancing Between His Live Audience On Show's Sets (View Post).

"Mann hai bahut films karne ka. I have done two films (in Hindi), and both turned out to be amazing experiences — shooting in various locations with talented co-stars. Nowadays, there is a demand for a lot of content and this is a good time for artistes, as there are so many platforms and more opportunities, (sic)” revealed Kapil to Bombay Times. The Kapil Sharma Show: Bhojpuri Stars Ravi Kishan and Manoj Tiwari Come Together for One Entertaining Episode.

(The above story first appeared on LatestLY on Sep 15, 2020 12:26 PM IST. For more news and updates on politics, world, sports, entertainment and lifestyle, log on to our website latestly.com).