The Vande Bharat trains are expected to be a big upgrade from the premium Rajdhani Express service. The sleeper class-version of these trains will be run on the routes to cover overnight rail journey like New Delhi-Patna, New Delhi-Lucknow and others. 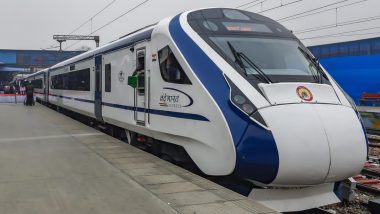 New Delhi, December 1: State-run Bharat Heavy Electricals Ltd (BHEL) has formed a consortium with Titagarh Wagons and is among five entities which have bid for the mega Rs 58,000 crore contract to manufacture 200 Vande Bharat trains and maintaining them for the next 35 years.

Other players in the fray include French railway major Alstom; Medha-Stadler consortium between Swiss railway rolling stock manufacturer Stadler Rail and Hyderabad-based Media Servo Drives; Siemens along with BEML, and Russian rolling stock manufacturer Transmashholding (TMH) along with an Indian firm. Vande Bharat 2: Indian Railways to Introduce Upgraded Avtar of Train 18 on September 30; From Newer Facilities To Technical Changes, Here's Everything You Need to Know.

Officials said while Rs 26,000 crore is the upfront payment on the delivery of the trains, Rs 32,000 crore will be paid to the winning bidder over a period of 35 years for the maintenance of these trains. The Indian Railways is now evaluating technical bids for the contract. The financial bids will be opened in the next 45 days.

According to the tender document, the successful bidder has to produce a prototype of the sleeper class for Vande Bharat trains within 24 months.

The Vande Bharat trains are expected to be a big upgrade from the premium Rajdhani Express service. The sleeper class-version of these trains will be run on the routes to cover overnight rail journey like New Delhi-Patna, New Delhi-Lucknow and others.

After four years of intensive work and planning, country's first and the second Vande Bharat trains as electric multiple units at semi-high speed, were flagged off by Prime Minister Narendra Modi in 2019 on the New Delhi-Varanasi and New Delhi-Katra in J&K routes. Video: Vande Bharat Outpaces Bullet Trains, Hits 0 to 100 Kmph in 52 Seconds.

The first VB train was flagged on the New Delhi-Varanasi route and the second one was on New Dehi-Katra route to provide fast rail transportation from the national capital to these pilgrim cities. The railway ministry is also working towards exporting these trains by 2026 to cover the international markets of South Africa and European countries.