Punjab: Two Girls Run Over By Speeding Vehicle Driven By Cop In Jalandhar, One Dead; Incident Caught on CCTV

two girls were run over by a speeding vehicle on Phagwara-Jalandhar Highway in Punjab's Jalandhar district on Monday morning. The vehicle was driven by a police inspector. Later, the accused was arrested. 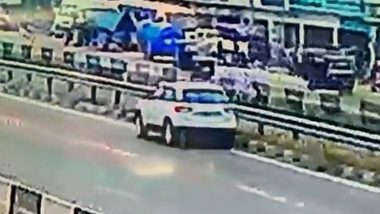 Jalandhar, October 18: In a chilling incident, two girls were run over by a speeding vehicle on Phagwara-Jalandhar Highway in Punjab's Jalandhar district on Monday morning. The vehicle was driven by a police inspector. Later, the accused was arrested. At the time of the incident, the girls were trying to cross the road. The video of the chilling incident went viral on social media. Mumbai Accident: 'Drunk' Driver Rams Speeding BMW Into Car on Bandra-Worli Sea Link, Lawyer Critically Injured.

In the footage, the two girls were seen waiting to cross the road. When they saw the speeding car coming towards them, both of them stepped back. But the car hit them, killing one of the girls on the spot. Meanwhile, the other girl sustained serious injuries. The incident took place at around 8:30 am near Jalandhar Cantonment. The accused, Amrit Pal Singh, was driving a white Maruti Brezza.

The deceased was identified as Navjot Kaur. The other girl was rushed to a hospital. She is currently undergoing treatment there. Kaur worked in a car showroom. Soon After the incident, a crowd gathered at the highway and then blocked the road. Mumbai Road Accident: Food Delivery Boy Dies After Overspeeding Mercedes Hits His Scooty in Oshiwara.

"My daughter left for work in the morning and was crossing the road near a railway crossing when the car hit them. The sub-inspector should be charged with murder," reported NDTV quoting Kaur's mother as saying. Balwinder Iqbal Singh Kahlon, ACP, Jalandhar Central said that the police are investigating the matter.

(The above story first appeared on LatestLY on Oct 18, 2021 05:16 PM IST. For more news and updates on politics, world, sports, entertainment and lifestyle, log on to our website latestly.com).