The Shri Ram Janmabhoomi Teerth Kshetra Trust has, so far, received donations to the tune of Rs 41 crore even before the construction of the proposed Ram temple has begun. 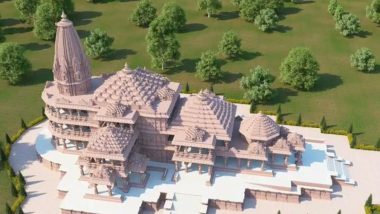 Ayodhya, Aug 6: The Shri Ram Janmabhoomi Teerth Kshetra Trust has, so far, received donations to the tune of Rs 41 crore even before the construction of the proposed Ram temple has begun.

This does not include the donations made by religious leaders, including Swami Chiddanand Saraswati of the Parmarth Niketan, Swami Avdeshanand Giri of the Juna Akhada, Baba Ramdev and other dignitaries who were in Ayodhya on Wednesday. After Ram Temple, Hindu Saints Now Wish to Take Up Kashi-Mathura Temples Issue.

According to Swami Govind Dev Giri, treasurer of the trust, "The total donation to the trust stood at Rs 30 crore when the logbook was last seen on Tuesday. Another Rs 11 crore was donated by Morari Babu, which makes it about Rs 41 crore. However, the amount does not include donations made on Wednesday."

The seer also stated that people had contributed for the cause of Ram temple even during the Covid-19 pandemic.

Sources said that donations totalling Rs 4.60 crore were received in two separate official accounts of the trust since March 25 when the lockdown was first imposed.

Online donations also came for the temple from the day the trust rolled out a net banking option on Ram Navami this year. Sources confided that over 5,000 people have availed the option. "The interesting part is that people are contributing from Rs 11 to whatever they can afford. But bigger amounts have come via cheques or e-banking," said a trust member.

The treasurer further said that the trust was loaded with queries for donations from overseas.

"We cannot accept money from NRIs till we get the Foreign Contribution Regulation Act certification which is in process. Then, the trust will immediately get donations worth Rs 5-7 crore," he said.

Trust officials also made it clear they were not averse to accepting donations from people of other religions.

(The above story first appeared on LatestLY on Aug 06, 2020 01:41 PM IST. For more news and updates on politics, world, sports, entertainment and lifestyle, log on to our website latestly.com).