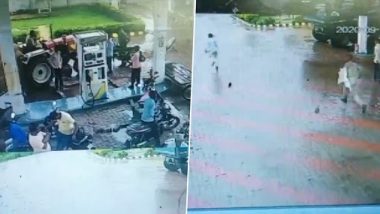 Lucknow, September 14: In a bizarre incident, an accused, who was sent to Police custody after being booked under Protection of Children from Sexual Offences (POCSO) Act, ran away from a petrol pump in Uttar Pradesh's  Lakhimpur Kheri region. According to a video of the incident released by ANI, the man managed to flee from the petrol pump while the vehicle in which he was being taken to police station was being refuelled. The incident took place in broad daylight on Sunday, September 13. POCSO Act Convicts Must Not be Allowed to File Mercy Petitions: President Ram Nath Kovind.

In a latest update, the accused who had fled from a petrol pump, while being taken to Police station in Lakhimpur Kheri on Sunday, has been nabbed today. FIR registered against the Constable and Home Guard jawan who were accompanying him. Earlier in the day, ASP Lakhimpur Kheri, Arun Kumar Singh said that the Police force from three Police stations were deployed and combing is being done.

The official expressed confidence that the accused will be nabbed soon. "I believe, we will catch him soon. Probe will be done, as far as the negligence of Police is concerned. Strict action will be take against the guilty", Singh said.  Madhya Pradesh Man Poses As Army Officer, Runs Away With Two INSAS Assault Rifles From Cantonment Area in Pachmarhi.

Police force from three Police stations have been deployed and combing is being done. I believe, we will catch him soon. Probe will be done, as far as the negligence of Police is concerned. Strict action will be take against the guilty: ASP Lakhimpur Kheri, Arun Kumar Singh https://t.co/vVGQp0pMqD pic.twitter.com/SfERHmtsoN

In August, a similar incident was reported from Noida region where a suspected thief fled from the lockup of a police station soon after his arrest. Reports informed that the accused hailed from Raebareli district in Uttar Pradesh.

(The above story first appeared on LatestLY on Sep 14, 2020 01:15 PM IST. For more news and updates on politics, world, sports, entertainment and lifestyle, log on to our website latestly.com).