In a shocking incident, a crane collapsed at Hindustan Shipyard Limited (HSL) in Andhra Pradesh's Visakhapatnam, killing 11 people, DCP Suresh Babu said. According to reports, the accident took place during the trial of load-testing trials. Meanwhile, the police and rescue officials have reached the accident spot. Officials are trying to retrieve bodies from the debris. 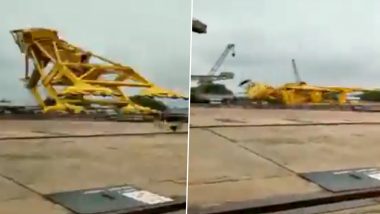 Meanwhile, the police and rescue officials have reached the accident spot. Officials are trying to retrieve bodies from the debris. The injured are being shifted to the local hospitals. An eight-second video, shared by news agency ANI, showed a yellow crane crashing down at the shipyard.

"A new crane was being commissioned. Trial run was being conducted to bring it into full-scale operation. We've also ordered inquiry both from within Hindustan Shipyard and also a high-level committee from the administration," Vizag District Collector Vinay Chand said.

(The above story first appeared on LatestLY on Aug 01, 2020 02:29 PM IST. For more news and updates on politics, world, sports, entertainment and lifestyle, log on to our website latestly.com).