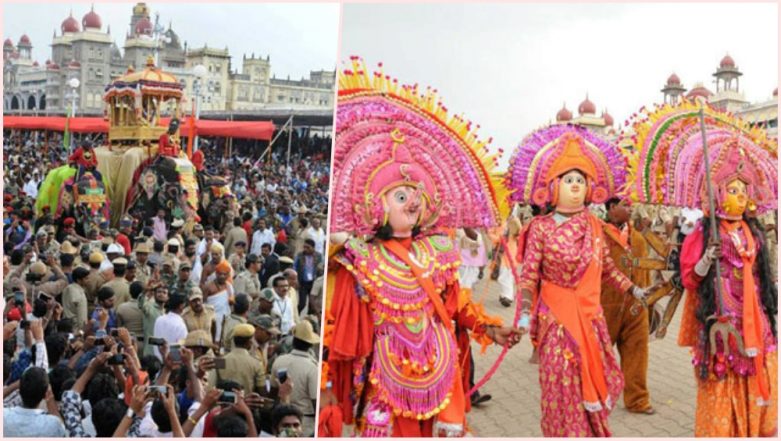 As we celebrate Navratri, some other states observe Durga Puja, Karnataka on the other hand witnesses a spectacle of the season; 10-day Mysore Dussehra. The festival has already begun from October 10 and people cannot keep their calm. In Mysore, Dussehra honours Goddess Chumundeswari (another name for Goddess Durga) of Chamundi Hill, who killed the demon Mahishasur. The festivity is also popularly known as 'Nadahabba', signifying the good over evil. Mysuru Dussehra is celebrated splendidly with plenty of performances depicting the rich culture and tradition of the state. As the air is thick with the festive fervour, let us go back to know the story, history and significance of this massive and vibrant event, Mysore Dussehra.  Idols of Goddess Durga for Navaratri Are Made With Soil From Sonagachi Brothels, Here's Why!

Mysuru Dasara 2018 will be observed from October 10 to 19 across the state with massive decorations; a lively time with processions and entertainment. There are several legends related to the festivity ranging from being a thanksgiving to the lord of the devas, Indra, for timely rainfall, to celebrating the triumph of good over the evil when Goddess Chamundeswari killed Mahishasura on Vijayadashami.

Mysore Dussehra is celebrated in Karnataka for more than 100 years now. Taking a look at the history, the very first celebrations were started by the Vijayanagar Kings in the 15th century. The city of Mysore was reigned by a buffalo-headed demon king, Mahishasura who would punish the people for worshipping the Gods. To stop his terror, the Gods sought the help of the Goddess Parvati, who incarnated in earth as Chamundeshwari Devi. She fought with the demon and slew him on top of the Chamundi Hill which is situated near the city. After killing Mahishasura, Goddess Chamundeshwari Devi decided to stay on the hill. Hence, the hill since then is known as Chamundi Hill.  What is Bommai Golu or Kolu, The South Indian Doll Display During Dussehra and Navratri?

The main attraction of the ten-day long festivity is the Mysore Palace. It was during the rule of Krishnaraja Wodeyar III in 1805, when the king started the tradition of having a special durbar at the palace during Dasara, which was attended by members of the royal family, special invitees, officials and the commoners. The Mysore Palace is illuminated daily with about 100,000 bulbs on all the days of the festival. Various cultural and religious programs including dance, music, portraying the culture of Karnataka, are performed in front of the illuminated Palace. Shri Durga Stuti Paath With Lyrics by Anuradha Paudwal: This Navaratri 2018, Chant Durga Stuti Mantra to Seek Divine Blessings From Maa Durga.

On Vijayadashami, the traditional Dasara procession is held on the streets of Mysore city. The idol of the Goddess Chamundeshwari is placed on a golden mantapa on the top of a decorated elephant; enthrals the devotees. Colourful tableaux, dance groups, music bands, decorated elephants, horses, camels create a part of the procession which starts from the Mysore Palace ends in an enchanting destination known as the Bannimantap. It is believed that the Pandavas in Mahabharata used the tree to hide their weapons during the one-year period of Agyatavas (living life incognito). Before undertaking any warfare, the kings would worship this tree to help them emerge victorious in the war. The last day, known as Vijayadashami is celebrated with a torchlight parade held at the Bannimantap.