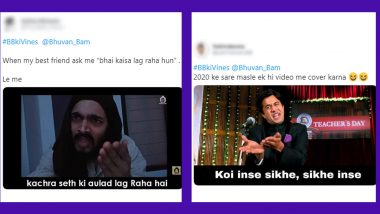 The YouTuber creator space has been all about creating roast videos since the last few months. After CarryMinati roasted TikTokers, it emerged into a trend among some creators who came up with their versions to the whole debate of YouTube vs TikTok. While that's somehow put to rest, another YouTuber Bhuvan Bam has contributed with what he calls the Ultimate Roast Video. Popular on YouTube as BBkiVines, he released a video this evening and fans are loving it. In about 5 minutes, Bhuvan Bam has covered a lot of trending topics in his roast and fans have taken their appreciation to Twitter. #BBkiVines is trending on Twitter with funny memes and jokes. Now users have got some more new meme templates to crack jokes on. BB Ki Vines Funny Memes Go Viral After YouTuber Bhuvan Bam Reminds Netizens of The ‘Real Issue’ via Titu Talks Video Amid YouTube vs TikTok Feud on Twitter!

Bhuvan Bam created an excitement among his fans last night when he tweeted about releasing the ultimate roast video. And soon after he released his video, fans have started trending how much they have loved it. The video has crossed over 4 lakh views in about two hours since it released. So it shows how much people have loved it. But the reactions always come in jokes and memes. With new memes come new templates and thus a rise of funny jokes.

Me To My Realtives: Aap Yaha

New video of #BBkiVines is out now.

Whenever my mother ask me to take bath during winter days.

A lot more people have just appreciated how much they loved the video for covering so many topics. Have you seen it yet? If you have been a fan of such roast videos then you may enjoy it. Or just enjoy the new meme content.

(The above story first appeared on LatestLY on Jul 03, 2020 07:19 PM IST. For more news and updates on politics, world, sports, entertainment and lifestyle, log on to our website latestly.com).