Burmese Pythons to Get Served in Florida Restaurants Once Scientists Confirm It's Safe for Consumption! What Is This Snake Dish Ready to Be Added in Food Menu

Burmese python maybe soon served in Florida restaurants if scientists confirm that they are safe for consumption. The Florida Fish and Wildlife Conservation Commission is collaborating with the Florida Department of Health to investigate the mercury levels in pythons to determine if they can be safely consumed. 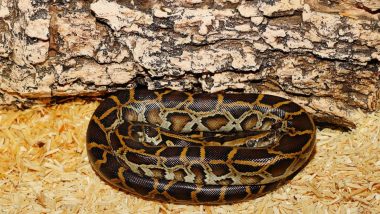 Burmese python maybe soon served in Florida restaurants if scientists confirm that they are safe for consumption. The Florida Fish and Wildlife Conservation Commission is collaborating with the Florida Department of Health to investigate the mercury levels in pythons to determine if they can be safely consumed. And if they give a nod, the snakes may soon end up on restaurant menus and tables across the state. Being an invasive species, the non-venomous constrictors are found in plenty in the state. Hence the state decided to make them into a legal dish. Know more about this snake dish below. Potentially 'Largest' Burmese Python Captured by Snake Hunters in Florida Everglades.

Now, to ascertain if Burmese pythons can be consumed as food or not, health officials are trying to understand the mercury levels in them. Pythons are not native to Florida, and were either released or escaped pet. Now they have altered the ecosystem with their presence. It began appearing in the Everglades in the 1980s. State officials have urged people to kill pythons if spotted, or to report sightings to officials. Florida Snake Hunter Catches Giant Man-Eater 17-Foot Python After a Bloody Battle.

Python eaters said that the meat is quite delicious. It is generally cooked in a pressure cooker to make the meat soft and tender. Followed by a little pasta sauce, chilli or stir fry. Some also like turning the snakes into jerky.

The government’s “contractor program” includes paying people for every python they catch. Called the Python Elimination Program, it is co-run by the FWC and South Florida Water Management District. They have so far removed more than 6,000 pythons from the Everglades, Wildlife commission spokeswoman Susan Neel said. The objective of the study is to develop and share "consumption advisories for Burmese pythons in South Florida to better inform the public," Neel said, with the hope that Floridians could soon eat pythons to help manage their populations.

If you are still wondering how to cook the snake or the recipe to make it, then watch the video below. In 2017, Gordon Ramsay and his son Jack Ramsay hunt and cooked a Burmese python in Florida.

Neel told CNN, "It is early on in the process for the mercury study. We are currently in the tissue collection stage of the project, and Covid has pushed our timeline back a bit. The plan is to have most of these samples come from pythons that are caught by our contractor program."

(The above story first appeared on LatestLY on Dec 22, 2020 10:49 AM IST. For more news and updates on politics, world, sports, entertainment and lifestyle, log on to our website latestly.com).