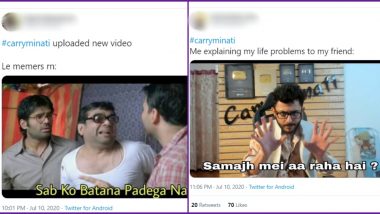 YouTuber CarryMinati is back with a new video on YouTube on his channel. His new video is on 'The Art of Bad Words' and he has roasted YouTube and their policies. It comes as no surprise that the new video has given rise to new memes and jokes online. Every video of the YouTuber has given a new set of meme templates which will now be used in days to come. CarryMinati memes are increasingly popular among his fans and the release of his new video is like an invitation to everyone to make memes. We have got you some of the funniest reactions on his latest video. CarryMinati 21st Birthday Celebration: YouTuber Ajey Nagar Posts Pic With His Cakes and Gifts, Says 'Positive Vibes Only'.

Ajey Nagar caused quite a stir in the last few months over his YouTube vs TikTok debate that started after his first roast video. The video churned out lot of memes along with all sorts of reactions involving TikTokers to the app getting deleted and reported by many. Now, one may have expected that he would address TikTok in the latest video, but he has focused on the usage of the bad words. So it is needless to say, that the video does have a lot of foul and abusive language. He has even taunted and joked on YouTube's policies, which had made him take down his video. All of this has given rise to some of the funniest memes and jokes, using the newer templates that people have now from this video.

Me explaining my life problems to my friend: pic.twitter.com/xMyVH0BaIv

Give Us a Break!

In case, you are just here for the new meme templates, then check the below tweet:

So, now there is definitely new content for people to make jokes on. Fans of the YouTuber are of course loving it and having their fun by making funny memes and jokes. The latest video is also getting all the love with over 2.5 million likes, some fans are celebrating it too.

(The above story first appeared on LatestLY on Jul 11, 2020 08:58 AM IST. For more news and updates on politics, world, sports, entertainment and lifestyle, log on to our website latestly.com).