Couple's Titillating Pre-Wedding Photoshoot is Making Netizens Wonder If It's From Their Honeymoon, View Part-Sensuous-Part-NSFW Pics 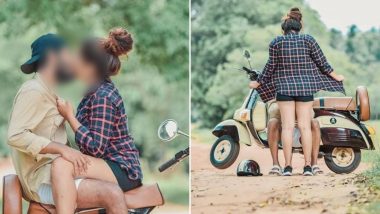 We wouldn't be wrong if we say, the race of standing out in the pre-wedding photoshoots is making couples do the unthinkable. The idea of clicking romantic pictures together and put them on social media or save the date cards is a trend since years, one that is only growing. People now have themes to their pictures too, but a certain couple's idea of the pre-wedding shoot has become more titillating than romantic. Their intimacy, kissing each other or the guy peeking in his partner's shirt is not too impressive, at least, not for people on social media. Some NSFW pictures from the shoot were shared on Twitter and people are asking if it is a honeymoon they are shooting for. Pre-Wedding Photoshoot Shows a Suicide Scene Between To-Be Husband and Wife, Angry Netizens Slam The Idea for Mocking Such a Serious Issue.

Like any pre-wedding shoot, these pictures feature the couple but their poses are a little over the top, or more like straight out of their bedroom. Contrary to the coy and shy pictures that we usually see, this couple goes bold to kiss and show off their intimacy to the camera. In one of the pictures, their clothes are hung out while the two are in a car. The sexual intimacy kind of pictures hasn't gone too well with people online. So when someone shared their pics online, more people questioned if it is a honeymoon shoot.

Why is it pre wedding shoot and not honeymoon shoot.

Pre Honeymoon If There is...

Relatives After Watching This

There are the usual shy poses pictures too but these poses have clearly missed that mark.

Check All The Pics Here:

Well, what do you have to say not that you have seen the entire album? This reminds us of another such 'dirty' photoshoot that had gone viral last year. The couple had posed in mud for their pre-wedding pics and the reactions were somewhat similar.

(The above story first appeared on LatestLY on Jul 08, 2020 06:18 PM IST. For more news and updates on politics, world, sports, entertainment and lifestyle, log on to our website latestly.com).