Donald Trump performed the act for the last time, as he pardoned Corn the Turkey from going on the dinner table. Two turkeys named Corn and Cob were selected for the annual pardoning ceremony. Donald Trump selected Corn as the national Thanksgiving turkey on Tuesday, November 24. 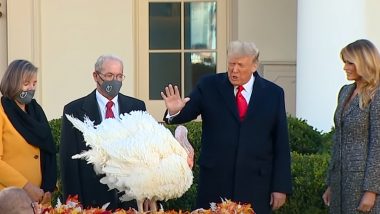 We are just a day away from Thanksgiving 2020. The annual harvest festive celebration and a time to dish out the Thanksgiving feasts is here. The feast seems incomplete without Turkey roast centerpiece at the table, but two Turkeys are pardoned every year from being killed for their meat. This time Donald Trump performed the act for the last time, as he pardoned Corn the Turkey from going on the dinner table. Two turkeys named Corn and Cob were selected for the annual pardoning ceremony. Donald Trump selected Corn as the national Thanksgiving turkey on Tuesday, November 24.

Corn and Cob were healthy, broad-breasted white turkeys raised in the National Turkey Federation. They were a sixth generation turkey from corn and soybean farmer from Walcott, Iowa. It was a looked up to event given the tense time of US Elections results. The event took place at Rose Garden on Tuesday where he granted Corn a full pardon and Cob was nowhere to be seen. Does that mean Cob does not live? No Cob will live too. At his address, President Trump started his address lauding the country's farmers, police and military. He also praised this tradition of Turkey Pardon which dates back to Abraham Lincoln. He then also lauded the progress of coronavirus vaccines and thanked the health care workers for controlling the pandemic. "Corn, I hereby grant you a full pardon!" Mr. Trump said, pardoning the turkey. Thanksgiving 2020 Virtual Celebration Ideas: Delicious Menu, Watch Macy’s Thanksgiving Day Parade Online and Playing Games, 6 Ways to Make the Holiday Fun, Safe and Worry-Free.

On behalf of the entire Trump Family, I want to wish every American a Healthy and Happy Thanksgiving! Today we gathered in the Rose Garden to continue a beloved annual tradition: the Official Presidential Pardon of a very fortunate Thanksgiving Turkey.... pic.twitter.com/O92pWUKrBv

Thanksgiving feast sees Turkey as a part of dinner among many other delicious recipes. Given that, almost every family marks this event, it is estimated that over 46 million fowls are killed around this time. During a Turkey Pardon event, two birds are relieved from the tradition and sent to shelter homes, where they are taken care of well. This tradition goes back to 1870s when American presidents were given well-fed fowls as gifts. It is said that Abraham Lincoln was the first president to unofficially pardon a turkey. His son had grown very fond of the turkey and Lincoln himself was an animal lover. The saved turkeys are looked after and protected from any of their predators.

(The above story first appeared on LatestLY on Nov 25, 2020 01:06 PM IST. For more news and updates on politics, world, sports, entertainment and lifestyle, log on to our website latestly.com).