An appointment letter issued by Excise Ministry claims that the applicant has been selected for the given post and asks him to deposit application fee for the same. PIB Fact Check has found out that the claim is fake and there is no Excise Ministry under the Indian government. 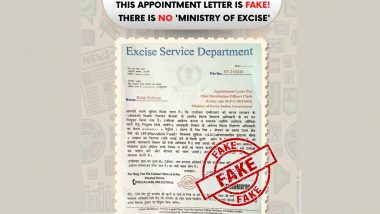 New Delhi, September 27: An appointment letter issued by the Ministry of Excise claiming that the applicant has been elected for a post and asking for an application fee is doing the rounds. The letters claims that the applicant has been selected for the post of for the post of Field Distribution Officer/Clerk. The fake letter further asks the selected applicant to pay an application fee for the same. It gives details of the salary and allowances if the applicant. Offer Letter Allegedly Issued by Ministry of Railways for Post of Clerk Goes Viral, PIB Fact Check Reveals Truth Behind Fake Letter.

Debunking the false information, a fact check undertaken by the Press Information Bureau (PIB) has found out that the claim made in the appointment letter is fake. Press Information Bureau has further clarified that there is no 'Excise Ministry' under the Government of India.  Appointment Letter Allegedly Issued by Ministry of Power for Post of Grade-1 Assistant Engineer Goes Viral, PIB Fact Check Reveals Truth Behind Fake Offer Letter.

▶️There is NO 'Excise Ministry' under the Government of India pic.twitter.com/puwNLEuxwZ

The claim is fake. There is no Excise Ministry under GOI

(The above story first appeared on LatestLY on Sep 27, 2021 06:06 PM IST. For more news and updates on politics, world, sports, entertainment and lifestyle, log on to our website latestly.com).