A video of a man, looking exactly like the Chinese billionaire and Alibaba founder, repairing an air-condition is going viral on social media. The social media posts claimed that the man in the video is Jack Ma. The video dated back to 2018. 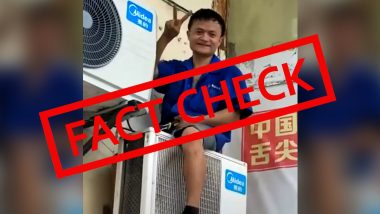 However, the video dated back to 2018. An online web portal, Share A News, posted the same video on July 2, 2018. The web portal wrote, "This air-con repair man looks remarkably like one of China's richest men, Jack Ma who founded the e-commerce company Alibaba.Have you find your look alike ?" 'Jack Ma is Not Missing, But Lying Low For Time Being', Says Report After Speculation About Alibaba Founder's Whereabouts.

Earlier this months, news surfaced that Jack Ma has not made any public appearance in the past two months. Questions have been raised about Alibaba founder's whereabouts.  On Wednesday, CNN reported that the 56-year-old entrepreneur is "likely laying low and is less visible purposely." According to the report, Jack Ma is in China's Hangzhou city. The Alibaba founder is reportedly missing since the Chinese government stopped his Ant Group's IPO. Jack Ma, Chinese Billionaire & Founder of Alibaba, Not Seen in Public for Two Months.

Alibaba shares plunged by almost 10 per cent in Hong Kong after the news, as Ma lost more than $3 billion in his net worth. Since then, Ma has been nearly untraceable. On December 26, the People's Bank of China, the country's central bank, "summoned Ant Group for regulatory talks, announcing a sweeping plan for the fintech firm to 'rectify' its regulatory violations.

The man in the video is not Jack Ma, but his lookalike

(The above story first appeared on LatestLY on Jan 07, 2021 09:08 PM IST. For more news and updates on politics, world, sports, entertainment and lifestyle, log on to our website latestly.com).