The fake advertisement that is going viral on social media platforms including Facebook, Twitter and WhatsApp claims that the advertisement has been put up by the Indo-Tibetan Border Police. 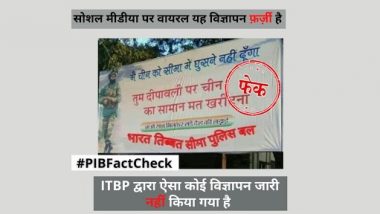 The claim states that the Indo-Tibetan Border Police has sponsored the advertisement stating that while the ITBP protects the borders, people should support it by not buying Chinese products during Diwali. Dismissing the fake claims, a fact check by the Press Information Bureau (PIB) states that this claim is fake and the ITBP has not issued no such advertisement. India’s Imports From China Have Increased by 27% During April-August? PIB Fact Check Debunks Fake News, Know Truth Behind Viral Tweet.

(The above story first appeared on LatestLY on Oct 29, 2020 10:35 AM IST. For more news and updates on politics, world, sports, entertainment and lifestyle, log on to our website latestly.com).