The brother of Squadron Leader Sameer Abrol, one of the Indian Air Force (IAF) pilots who died in a plane crash in Bengaluru, has written an emotional poem dedicated to the martyred soldier. 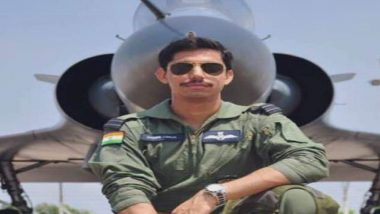 Bengaluru, February 6: The brother of Squadron Leader Sameer Abrol, one of the Indian Air Force (IAF) pilots who died in a plane crash in Bengaluru, has written an emotional poem dedicated to the martyred soldier. Sushant Abrol wrote the poem while coming back with his mortal remains. In the poem which went viral on social media, Sushant blamed the government for the tragedy.

The martyr’s brother through his poem alleged that corruption in the bureaucracy took his brother’s life and also the government did not care about the lives of soldiers. In an interview given to IANS, Sushant said that he wasn't blaming anyone in specific but the system in general for the negligence and corruption. The poem was shared by Sqn Ldr Abrol’s wife, Garima Abrol.

Poem shared by Garima, wife of Late Sqn Ldr Abrol, who died on 1st of February, 2019 in crash of HAL's Mirage pic.twitter.com/j0PUZZmQqi

The tragic incident took place on February 1, when Hindustan Aeronautics Limited’s (HAL) Mirage 2000 trainer jet crashed in Bengaluru. Two IAF pilots, Sqn Ldr 31-year-old Siddhartha Negi and 33-year-old Sqn Ldr Abrol, lost their lives in the crash. The plane went up in flames as it crashed with an explosion. Thick smoke billowed from the spot, leaving passersby and residents living around the airport in a shock.

Sqn Ldr Negi died on the spot, while Sqn Ldr Abrol succumbed to injuries after being taken to the Command hospital. Meanwhile, days after the crash, the IAF has said that it will send the crashed Mirage 2000 black box to France to know the exact details of the mishap.

(The above story first appeared on LatestLY on Feb 06, 2019 05:16 PM IST. For more news and updates on politics, world, sports, entertainment and lifestyle, log on to our website latestly.com).