In an incredible piece of news, a goat Lincoln, and a dog, Murfee who were each elected mayor have helped raise money to renovate a Vermont community playground. 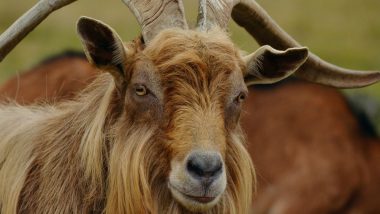 In an incredible piece of news reveals, a goat Lincoln, and a dog, Murfee who were each elected mayor have helped raise money to renovate a Vermont community playground. The offbeat idea of pet mayor elections to raise money to rehabilitate the playground worked out and it has finally paid off. It has now helped the local kids to get civically involved. In 2018, Fair Haven residents elected Lincoln the goat as its honorary mayor. Lincoln helped raise about USD 10,000 while the current mayor, Murfee, a Cavalier King Charles spaniel, has raised USD 20,000, Town Manager Joe Gunter told the Rutland Herald. The town chipped in another USD 20,000. Murfee's owner, Linda Barker, said that when she was talked into having Murfee get involved in politics, she thought it would be easy to raise money through T-shirts. Then the pandemic struck.

So she shifted to masks. She's made nearly 1,000 of them, and will be making another round of them for Valentine's Day. She raised more than USD 5,000 from the masks and a similar amount from basket raffles. The town was also recently awarded a USD 50,000 grant from the federal Land and Water Conservation Fund, she said. Ironically, the honorary mayor is not welcome on the playground. Barker said there's a "no dogs allowed" sign. “Murfee is going to take that up with the town,” Barker said Sunday with a chuckle. “He's going to contest that.”

It has not known before for dogs and goats to be contesting in this city of America. The noble objective of Mayor Election for pets is to create a community playground for children just perfectly worked out. The fund raised by this election was not just used to make a playground, apart from this, some money will also be spent on the rehabilitation of children.

The candidates for Mayor were: a goat named Lincoln faces a dog named Sammy the German Shepherd K-9. Sammy has been nominated by the Chief of Police. Sammy is said to be a favourite dog in the city. The election date was on March 3. People were to pay 1 dollar for voting. According to a report, a GoFundMe page was also been created to raise money for the playground. $ 80,000 was needed to build a playground in the city. Town manager Joe Gunter explained the responsibilities of the mayor that the mayor would manage the fund through a march in the parade.

(The above story first appeared on LatestLY on Jan 18, 2021 07:39 PM IST. For more news and updates on politics, world, sports, entertainment and lifestyle, log on to our website latestly.com).