The Simpsons Predicted Annabelle Doll's Escape? While The Demonic Doll of 'The Conjuring' Fame is Safe in Warren's Occult Museum, Netizens Cannot Unsee This Coincidence From American Sitcom 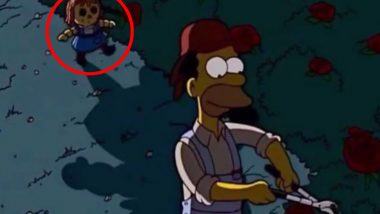 Reading this piece you would definitely want to watch the reruns of The Simpsons to know what more 2020 has in store for us. The American animated series has time and again made it to the headlines, more so this year, for predicting almost every crisis we have faced yet. Just when people found out similarities from the series to Beirut explosion, there's another prediction almost coming true. This is about the Annabelle escape! There were rumours that the creepy doll Annabelle has escaped from the Warren's Occult Museum. Thankfully, those was just rumours and a proof that Annabelle is still behind glass enclosure has been revealed. But netizens have found an episode from The Simpsons where Homer Simpsons is cutting the grass and there's a spooky doll right behind him. The possessed down even attacks Homer.

Since the last two days, there was quite a buzz on Twitter about Annabelle the haunted doll from The Conjuring fame has escaped from the Occult Museum. With 2020 really not shaping up for the better, it freaked out some people. However, turns out it was just a rumour. Tony Spera, the son-in-law of late paranormal investigators Ed and Lorraine Warren, took to the family's YouTube channel and confirmed Annabelle was still in her glass enclosure. So that's a respite, but people are quizzed about how The Simpsons get everything so accurate about what happens in the future. An episode called "The Re-Deadening" shows Homer being attacked by the possessed doll. The Simpsons Predicted Murder Hornets? Netizens React to The Coronavirus Prediction Episode Showing Killer Bees (Check Tweets).

Didn't They Predict This?

Scared of The Simpsons

I'm not afraid of Annabelle, but the Simpsons who predicted Annabelle's escape pic.twitter.com/d6hiq2HAoB

How is nobody talking about that the Simpsons just did it again!?! Annabelle Warren pic.twitter.com/wq44WnYQGj

Someone else has shared the same picture and wrote that the writers should be questioned, well, we agree!

Here's The Video of Episode Which Shows The Possessed Doll:

Can you believe it? How has this show tapped on everything that's happened so far in this year so accurately? Although Annabelle doll is safe within the glass enclosure, it is creepy how this show almost predicted that happening too.

(The above story first appeared on LatestLY on Aug 15, 2020 08:56 PM IST. For more news and updates on politics, world, sports, entertainment and lifestyle, log on to our website latestly.com).