The left-hander made the most of his comeback Test match as he struck his second hundred of the game to put Australia in complete control of affairs. At the close of play, England were 30/0, needing 358 more runs to win the fourth Ashes Test at the Sydney Cricket Ground. 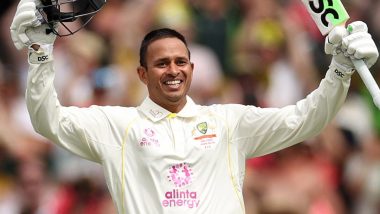 Usman Khawaja starred once again as he scored his second hundred of the fourth Test match at the Sydney Cricket Ground. If there was a good way to mark a comeback, it was this. Back to the Test side after three years, Khawaja made everyone take note of his talent as his 101* helped Australia declare their second innings effort at 265/6. England, having been set a mammoth 388-run target to chase, were 30/0 at the close of play the Sydney Cricket Ground. Australia vs England, 4th Ashes Test 2021–22: Jonny Bairstow Hits Back at Fans Body-Shaming Him and Ben Stokes During Day 3 at Sydney Cricket Ground (Watch Video)

England could do add much to their overnight total as they were skittled out for 297. Australia capitalised on the 122-run lead to ensure that they cut out all of England's hopes of another fightback. They did lose their top four for just 85 runs on the board but Khawaja alongside Cameron Green (74) ensured that the hosts got to a very strong position. Green and Khawaja stitched a 179-run stand for the fifth wicket, which completely took the fight out of England as Australia posed a daunting 388 for the visitors to chase and score their first win of the series. England would be happy that they did not lose a wicket in their second innings on Day 4 with Haseeb Hameed and Zak Crawley putting on 30 runs as the day ended.

Let us take a look at some stat highlights from this game:

#Usman Khawaja scored his second century of the match as he became the third player to score hundreds in both innings of a Test match at the Sydney Cricket Ground.

# Khawaja also became the sixth Australian to score hundreds in both innings of a Test match.

#With His two hundreds, Khawaja has more runs than any England batter barring Joe Root in the ongoing Ashes.

#Steve Smith completed 3000 runs in the Ashes. He also rose to seventh on the list of all-time top Test run-scorers for Australia.

With one day left, Australia need 10 wickets and England, who would be under loads of pressure, need another 358 runs to win this Test, something that looks very unlikely at this point in time.

(The above story first appeared on LatestLY on Jan 08, 2022 02:13 PM IST. For more news and updates on politics, world, sports, entertainment and lifestyle, log on to our website latestly.com).