The visitors showed dogged determination to ensure that the match ended in a draw despite Australia applying loads of pressure on them, especially during the closing stages of the day. The next and final Test match of the series begins in Hobart from January 14 onwards. 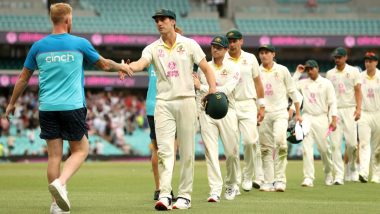 If there ever had to be an advertisement for Test cricket, this was it. England nine down, needing to survive the final ball with Australia enclosing eight fielders round the bat in search of the edge! Every ball was greeted with ''oohs' and 'aahs' from the players as well as the lively Sydney crowd but eventually, England held their nerve to eke out a draw in what was an enthralling contest between bat and ball on the final day of the fourth Ashes Test match.  The visitors surely did have a disappointing tour so far but this win is sure to lift some spirits in their dressing room, as they prepare and gear up for the fifth and final Test in Hobart. Ashes 2021–22: Australia Opt for Tight Field Placement Against England in 4th Test at Sydney Cricket Ground, Netizens React!

England needed a mammoth 358 more runs to win at the start of the day and Australia did what they have been doing so consistently and perfectly---break partnerships and take early wickets. The overnight 30-run opening partnership could only grow to 46 before Scott Boland removed Haseeb Hameed. Dawid Malan soon fell to Nathan Lyon with the ball keeping low. Boland soon dismissed England captain Joe Root to put his side firmly on top. A noteworthy innings was played by Zak Crawley. The right-hander hit 77 runs with 13 fours and showed some grit before being dismissed by Cameron Green. Ben Stokes' Reaction During Final Over of Australia vs England 4th Ashes 2021–22 Test at Sydney Cricket Ground Goes Viral (Watch Video)

And it was all down to Jonny Bairstow and Ben Stokes once again to save the game for England. But they could only add 37 runs together before Lyon got rid of the flamboyant all-rounder for a well-made 60. England still continued to hang on, with Jos Buttler scoring 11 but Aussie skipper Pat Cummins' two-wicket burst in one over left Bairstow as the only recognised batter, who could save the match for his side. His dismissal in the 92nd over raised Australia's hopes of clinching another win but Jack Leach's gritty 26 off 34 kept England in the game. The entire Sydney Cricket Ground erupted in joy when Steve Smith had Leach's wicket with England one away from a loss in the 100th over. But the veteran pair of Stuart Broad and James Anderson managed to play out the remaining two overs of the day to pull off a thrilling draw.

Let Us Take a Look at Some Stat Highlights of the Game:

#With Jack Leach's dismissal, Steve Smith got his first Test wicket since 2016

#With this result, England avoided the whitewash, although they have lost the series 3-0.

#Joe Root has been dismissed by Scott Boland for three times in 27 balls now.

#Zak Crawley (23y 340d) is the third youngest Englishman to score 50+ runs in a Test against Australia. He scored his fifth Test fifty.

Australia and England now head to the fifth and final Test match of the series, which would be played from January 14 in Hobart.

(The above story first appeared on LatestLY on Jan 09, 2022 03:33 PM IST. For more news and updates on politics, world, sports, entertainment and lifestyle, log on to our website latestly.com).