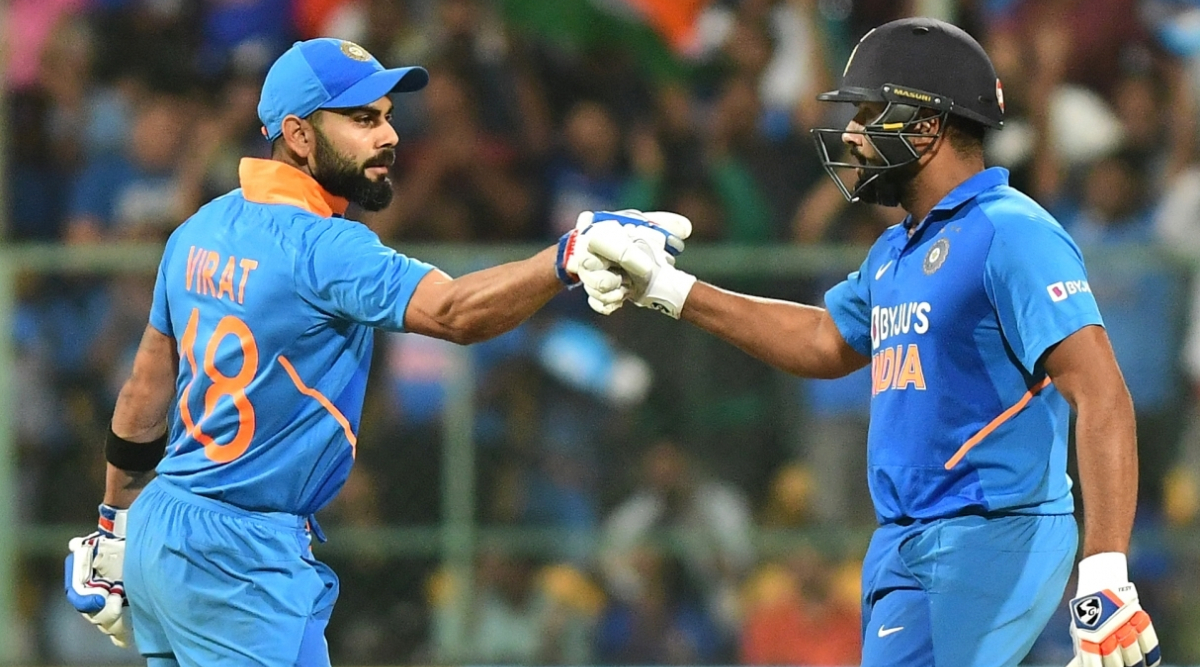 India defeated Australia in third and final One-Day International (ODI) by eight wickets at the M Chinnaswamy Stadium in Bengaluru. With this win, India clinches the three-match series 2-1. Set a target of 287, India, thanks to Rohit Sharma and Virat Kohli’s superb batting, achieved it in 47.3 overs. While Rohit scored his 29th ODI century, Kohli was dismissed on impressive 89. Nonetheless, Kohli made sure he stayed in the middle for as long as possible. Rohit Sharma Becomes Third-Fastest Batsman to Reach 9000 Runs in One Day Internationals, Reaches Landmark During India vs Australia 3rd ODI 2020.

Opener Shikhar Dhawan injured himself in the field and thus India had to open with KL Rahul as Rohit Sharma’s partner. The makeshift Indian opening pair did well and added 69 runs for the first wicket. Ashton Agar then dismissed Rahul to provide his side with a breakthrough.

Rohit and Kohli then added 137 runs for the second wicket and virtually batted Australia out of the contest. In the process, Rohit scored his 29th ODI century. The right-hander, before being dismissed in the 37th over, scored eight fours and six sixes. Rohit fell on an individual score of 119 runs off 128 balls. However, Kohli continued his good show and took his side close to the target. The Indian captain was dismissed in the 46th over on an individual score of 89 off 91 balls. Virat Kohli Breaks MS Dhoni’s Record to Become the Fastest Captain to Score 5,000 Runs in ODIs, Achieves Feat During IND vs AUS 3rd ODI 2020.

# Virat Kohli broke MS Dhoni’s record to become the fastest (82 inns) to reach 5,000 runs as a captain in ODIs.

# Rohit Sharma is now fourth on the list of most centuries in ODIs. He surpassed Sanath Jayasuriya.

# Both Rohit Sharma and Virat Kohli now have eight ODI centuries against Australia.

# Virat Kohli has now won eight Man of the Series awards in ODIs, third most followed by Tendulkar (14) and Jayasuriya (11).

While Rohit and Kohli made big contributions, Shreyas Iyer, who came in to bat at number four, scored unbeaten 44 off 35 balls to guide India to victory. For Australia, Adam Zampa, Ashton Agar and Josh Hazlewood picked a wicket each. Most Centuries in ODIs: Rohit Sharma Moves Past Sanath Jayasuriya to Take Fourth Spot on the List.

Earlier, despite Steve Smith’s century Australia were restricted under 300. Smith 131 off 132 balls. Apart from him, Marnus Labuschagne scored 54 as the duo added a 127-run stand for the third wicket. For India, fast bowler Mohammed Shami picked four wickets.