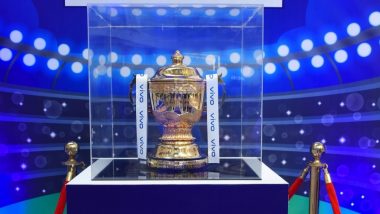 BCCI have officially communicated with the Emirates Cricket Board to host the 2020 edition of the Indian Premier League (IPL) in the UAE. It was earlier confirmed that IPL 2020 will be played in the United Arab Emirates and will start from September 19 later this year. But the BCCI was yet to officially communicate the information to UAE and ask them to prepare for hosting the tournament. But according to a latest report, the Indian cricket board have now officially written to the UAE cricket board to host the tournament. The 13th edition of the IPL will begin on September 19 and will run until November 8 when the final will be played. IPL 2020 Players Update: David Warner, Ben Stokes, Steve Smith, Other England and Australian Cricketers to Miss First Few Matches of Indian Premier League Season 13?

According to a report from Inside Sport, IPL manager Brijesh Patel confirmed to Khaleej Times that the BCCI have sent the acceptance letter for hosting the T20 franchise tournament in UAE. The Emirates Cricket Board had earlier written to the BCCI offering to host IPL 2020 in the UAE with the tournament unlikely to be held in India due to the rapid increase in the number of coronavirus cases. Virat Kohli-Led RCB Title Favourites for IPL 2020, Says Brad Hogg; Former KKR Bowler Also Rates Mumbai Indians to Win Indian Premier League 13.

“Yes, we have sent the acceptance letter to the Emirates Cricket Board and both the boards will be working together from now on to stage the tournament,” the chairman of the IPL Governing Council told Khaleej Times on Sunday. Patel also confirmed that all eight IPL franchise teams will hold their pre-tournament training camps in the UAE.

“The teams need at least three to four weeks to prepare for the tournament,” said Patel before adding that the training camps will be held in the UAE in a ‘bio-secure’ environment,” the report in Inside Sport stated.  The IPL Governing Council is set to meet once again next week to decide on the schedule of IPL 2020 and also start the operations for organizing the T20 league in the UAE.

Meanwhile, reports have also stated that Australian and England cricketers could miss the opening weekend of the IPL 2020 with Australia vs England bilateral series set to run until September 16. A number of stars from both cricketing nations play in the IPL and with the AUS vs ENG series set to go on till September 16, cricketers of both nations might not be able to take the field until the third week due to quarantine rules.

(The above story first appeared on LatestLY on Jul 26, 2020 09:46 PM IST. For more news and updates on politics, world, sports, entertainment and lifestyle, log on to our website latestly.com).

Comments
Tags:
BCCI Board of Control for Cricket in India (BCCI) Indian Premier League (IPL) ipl 2020 IPL 2020 Update
Comments
You might also like