RCB May Fail to Qualify for IPL 2020 Playoffs, Here's How Virat Kohli and Co Could Miss Top-Four Finish Yet Again

Royal Challengers Bangalore (RCB) have suddenly lost the plot and are facing the scare of getting knocked out of the IPL 2020 playoff race. Their five-wicket defeat against Sunrisers Hyderabad was their third straight loss of the season, and now, their last league-stage game against Delhi Capitals will be a virtual knock out. 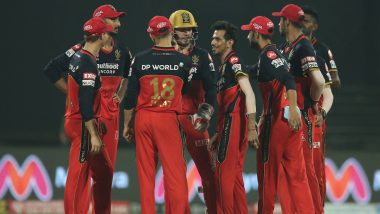 After enjoying a sensational campaign in the major part of Dream11 Indian Premier League (IPL) 2020, Royal Challengers Bangalore (RCB) have suddenly lost the plot and are now, facing the scare of getting knocked out of the IPL 2020 playoff race.The Virat Kohli-led side slumped to their third straight loss of the season against Sunrisers Hyderabad, making their last league-stage game against Delhi Capitals will be a virtual knock out. Although RCB are currently sitting at the second position in the points table with 14 points, their poor net run rate (-0.145) might become a reason for their ouster. RCB vs SRH Stat Highlights IPL 2020.

At one stage, RCB were cruising towards the final four with seven victories in the kitty in 10 games. However, defeats against Chennai Super Kings, Mumbai Indians and Sunrisers Hyderabad have dented their campaign. Notably, SRH chased the required total against RCB with as many as 35 balls to spare which has jolted the Virat Kohli-led side’s net run rate. Notably, even a loss against Delhi Capitals would not guarantee their ouster, there are various possible scenarios which can knock RCB out. IPL 2020 Points Table Updated With Net Run Rate.

If Bangalore lose to Delhi and Kings XI Punjab and Sunrisers Hyderabad will win their respective remaining games against Chennai Super Kings and Mumbai Indians respectively, Virat Kohli and Co will be out of the competition. In this situation, MI, DC, KKR and KXIP will be the final four teams in the standings. Although RCB’s points tally (14 points) will be equal to that off KKR and KXIP, they will be left behind based on net run rate.

RCB last qualified for the playoffs back in 2016 and were on track to end their drought in 2020. However, they have lost the plot from nowhere and could again finish amongst the bottom-four team. Nevertheless, unlike other sides, RCB still have their fate in their own hands. They will qualify for the playoffs without any drama after defeating Delhi Capitals. Notably, DC are also a four-match winning streak, and just like RCB, this game will be a virtual knock out for them as well. Meanwhile, the high-voltage clash will take place at the Sheikh Zayed Stadium in Abu Dhabi.

(The above story first appeared on LatestLY on Oct 31, 2020 11:52 PM IST. For more news and updates on politics, world, sports, entertainment and lifestyle, log on to our website latestly.com).