After some high-voltage drama between the bat and the ball, Punjab Kings defeated Rajasthan Royals by four runs in their first game of VIVO Indian Premier League (IPL) 2021. Chasing a mountain of 222 at the Wankhede Stadium in Mumbai, Sanju Samson put up an exhibition of high-class batting and registered a brilliant hundred but his efforts eventually went in vain. 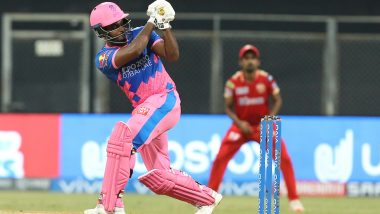 After some high-voltage drama between the bat and the ball, Punjab Kings defeated Rajasthan Royals by four runs in their first game of VIVO Indian Premier League (IPL) 2021. Chasing a mountain of 222 at the Wankhede Stadium in Mumbai, Rajasthan lost the likes of Ben Stokes and Jos Buttler cheaply. Nevertheless, Sanju Samson, standing in his first captaincy assignment in IPL, put up an exhibition of high-class batting and registered a magnificent hundred. The likes of Shivam Dube and Riyan Parag also chipped in with handy cameos. However, it was skipper Samson who kept RR in the hunt for most of the game and even looked set to take the Men in Pink over the line. Unfortunately for them, a sensational last over from Arshdeep Singh took Punjab to victory from the jaws of defeat. IPL 2021 Points Table Updated.

Earlier in the game, Rajasthan Royals captain Sanju Samson won the toss and elected to bowl first. RR got off to a brilliant start, with opener Mayank Agarwal getting out cheaply. However, skipper KL Rahul joined forces with Chris Gayle, and the duo slammed fours and sixes for fun. PBKS bowlers were humiliated even further when Deepak Hooda came in after Chris Gayle’s departure. The Haryana dasher dealt in sixes and got to his fifty off mere 20 balls. At the other end, skipper Rahul continued his onslaught and was advancing towards his third IPL ton. However, a sensational catch from Rahul Tewatia meant the Punjab skipper had to walk back for 91. PBKS eventually posted 221/6, which just proved to be enough. Meanwhile, let’s look at the stat highlights of the game. RR vs PBKS Highlights of VIVO IPL 2021.

# This was Rahul’s third successive 90 plus score in IPL at the Wankhede Stadium in Mumbai.

# Deepak Hooda completed his fifty off just 20 balls, second-fastest by an uncapped player in IPL.

# Samson became the first player in IPL history to smash a century on captaincy debut.

# Sanju Samson is now also the holder of the IPL 2021 orange cap.

Rajasthan will now meet Delhi Capitals at the same venue on April 15, and Rishabh Pant’s army must beware of the wounded lions. On the other hand, KL Rahul and Co have made a statement here and will be a team to watch out for this season. They’ll next face MS Dhoni-led Chennai Super Kings on April 16.

(The above story first appeared on LatestLY on Apr 13, 2021 12:00 AM IST. For more news and updates on politics, world, sports, entertainment and lifestyle, log on to our website latestly.com).