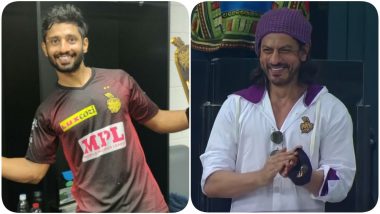 Kolkata Knight Riders delivered a magical performance last night in the Dream 11 IPL 2020 match against Chennai Super Kings at the Sheikh Al Zayed Stadium in Abu Dhabi. It was Rahul Tripathi who walked away with the limelight as he scored 81 runs from 51 balls and also walked away with the Man of the Match award. Now, this surely impressed the Kolkata Knight Riders’ boss Shah Rukh Khan as he took to social media and delivered one of his most iconic dialogues, ‘Rahul naam toh suna hoga’ as he hailed the team on social media. SRK took to social media and said wrote, “We were a few runs short, but the bowling made up for it at the end. Well played boys of @KKRiders And have to mention our @ImRTripathi  ‘Naam toh suna tha....kaam usse bhi kamaal hai’ Be healthy all of you and rest well. @Bazmccullum  will see u soon.” KKR vs CSK Stat Highlights Dream11 IPL 2020: Rahul Tripathi Smashes His First Fifty of Season as Kolkata Knight Riders Register 10-Run Victory.

Even the official account of the Kolkata Knight Riders praised Rahul for his innings. Rahul was posing for camera holding his two trophies with his arms spread apart. Now, we all know that this is yet another iconic Shah Rukh Khan pose which is quite popular. The team even shared the moment when Rahul Tripath met Shah Rukh Khan for the first time as Dinesh Karthik introduced him to the KKR owner. Now let’s have a look at the tweets by SRK and KKR.

(The above story first appeared on LatestLY on Oct 08, 2020 11:03 AM IST. For more news and updates on politics, world, sports, entertainment and lifestyle, log on to our website latestly.com).