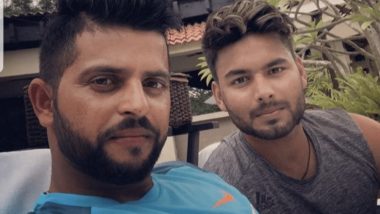 No sooner IPL Chairman Brijesh Patel announced the dates for the upcoming season of the IPL 2020, Chennai Super Kings Vice-Captain Suresh Raina and Delhi Daredevils’ Rishabh Pant began preparing for the much-awaited season. The two straight away headed to choose the choice of their weapon. Pant and Raina went on to buy a bat for themselves for the 13th edition of the Indian Premier League. The CSK vice-captain and Pant were seen weighing the bat on the weighing scale and got the feel of the after hitting a few shots. IPL 2020: MS Dhoni, Suresh Raina, Ravindra Jadeja and Other Players of CSK Squad to Leave for UAE Between August 10-16, Claims Report.

The CSK vice-captain shared the video of the same on social media. The two were seen wearing masks as they headed to the bat manufacturer. The two closely checked the details of a few bats and then made a choice. “Gearing up for the much-awaited season of IPL with the first step of finalising my BatCricket bat and ball Can’t wait to be back at the FIELD Smiling face with sunglasses..One Happy Soul, One Step at a TimeSparkles @RishabhPant17 @sg_cricket,” read the caption of the video shared by Suresh Raina. The IPL 2020 is all set to begin from September 19, 2020, and it is widely reported that the team Chennai Super Kings will leave for UEA a week earlier than the other squads. Check out the video below:

Gearing up for the much awaited season of IPL with the first step of finalising my Bat🏏 Can’t wait to be back at the FIELD😎..One Happy Soul, One Step at a Time✨@RishabhPant17@sg_cricketpic.twitter.com/dmRcdwaTz6

The BCCI will meet the franchises to chalk out the further plans of the tournament. All the teams have been asked to leave for UAE by August 20th 2020. The announcement about the 13th season of the Indian Premier League has surely changed the mood of the fans.

(The above story first appeared on LatestLY on Jul 26, 2020 09:01 AM IST. For more news and updates on politics, world, sports, entertainment and lifestyle, log on to our website latestly.com).