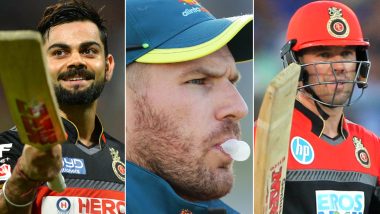 Royal Challengers Bangalore (RCB) will square off against Sunrisers Hyderabad (SRH) in Dream11 Indian Premier League (IPL), 2020 match no 3. The game will be held at Dubai International Cricket Stadium, Dubai on September 21, 2020. RCB will be led by Virat Kohli, while SRH will play under the captaincy of David Warner. SRH finished at the fourth position in IPL 2019 as they made it to the playoffs, while RCB ended at the bottom in the previous season. Meanwhile, check out pumped-up RCB camp where Virat Kohli, Aaron Finch, AB de Villiers look excited and full ready ahead of SRH vs RCB, IPL 2020. SRH vs RCB Dream11 IPL 2020: Virat Kohli, David Warner and Other Players to Watch Out For in Indian Premier League Season 13 Match 3.

In the recent video posted by RCB, we can see their coach Mike Hesson speak about the way team has been preparing since few days. Dale Steyn, Navdeep Saini, Washington Sundar and other RCB players also have shared their emotions and thought before the opening game. RCB skipper Virat Kohli says that they will go out in the field and give their best. Kohli further said that everyone in the squad is batting well and bowling well. Adam Zampa addition in the team will also play a key role at the UAE pitches. Speaking about RCB head to head record with SRH, Bangalore has won 6 games out of 15, while one match ended in no result. Both teams also locked horn with each other in the final of IPL 2016, which was won by the orange army under the leadership of David Warner. SRH vs RCB Dream11 Team Prediction IPL 2020: Tips to Pick Best Fantasy Playing XI for Sunrisers Hyderabad vs Royal Challengers Bangalore Indian Premier League Season 13 Match 3.

The Royal Challengers Bangalore are pumped and raring to go! Watch our players and coaches talk about the team’s readiness ahead of our first match of Dream 11 IPL. 😎 #PlayBold #IPL2020 #WeAreChallengers #Dream11IPL

A post shared by Royal Challengers Bangalore (@royalchallengersbangalore) on Sep 20, 2020 at 8:31pm PDT

Virat Kohli's Bangalore side will definitely eye on bagging winning points in their opening game against Sunrisers Hyderabad. With both teams having world-class bowlers and batsmen, SRH vs RCB, IPL 2020 match 3 will be an interesting contest to watch out for.

(The above story first appeared on LatestLY on Sep 21, 2020 10:19 AM IST. For more news and updates on politics, world, sports, entertainment and lifestyle, log on to our website latestly.com).