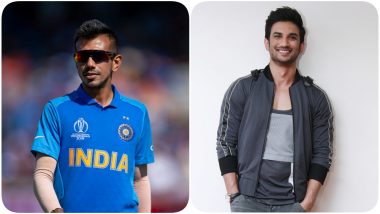 Sushant Singh Rajput’s suicide has shocked the entire industry. The ‘Raabta’ actor was found hanging in his house in Bandra, Mumbai and the fans still are not able to digest the news of his death. Actors, politicians, members from the sporting fraternity paid tributes to the late actor. Now, Yuzvendra Chahal shared a heart-wrenching post on his Instagram story. In the post, we see a caricature where he was seen beaming despite being stabbed by the knives of nepotism, bullying and being banned. Sushant Singh Rajput Death: Mumbai Police Recovers 5 Diaries From the Late Actor's Residence.

In short, all he meant to say was that Sushant maintained his composure despite being marred by various burdens. It was said that the reason behind his suicide is reported to the lack of film projects in his kitty. As per several other media reports, it is said that the late actor was banned by several big banners of the industry. Now, let's have a look at the snap shared by Yuzvendra below; 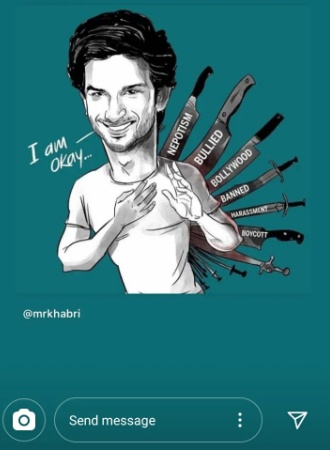 Talking tributes, even Master Blaster Sachin Tendulkar paid tributes to the later actor on social media and said that he was shocked to hear the news of Sushant's demise. The late actor made a debut in Bollywood with 'Kai Po Che!' alongside Amit Sadh and Rajkumar Rao. His acting in 'MS Dhoni: The Untold Story' also impressed Chennai Super King's Shane Watson and the Australian cricketer also shared a post on social media. He went on to say that in the film Sushant actually forgot if he was Dhoni or Sushant.

(The above story first appeared on LatestLY on Jun 19, 2020 10:46 PM IST. For more news and updates on politics, world, sports, entertainment and lifestyle, log on to our website latestly.com).