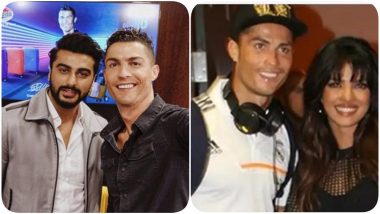 Arjun Kapoor and Ayushmann Khurrana had met the former Real Madrid player as a part of the promotional campaign. Even Virat Kohli wad roped in for the campaign. The actor even went to tell CR7 on how much people love him in India. Arjun had shared the snap on his Instagram account. Even the Vicky Donor actor took to social media and shared the snap along with the star footballer.

Amazing feeling meeting & talking football with @cristiano !!! Heck of a player, heck of a guy. All the best for Kiev & Russia. Thank you @amtouristerin for this... Truly #HardToLetGo #AmericanTourister #Curio

The picture everyone's been waiting for...

It was amazing meeting one of the greatest football players! @Cristiano@AMTouristerIN - it was truly such a #HardToLetGo moment just like my #Curio! pic.twitter.com/dQflsTclnb

Way back in 2013, when Priyanka Chopra was busy promoting her single ‘Exotic’, she was spotted partying with the star footballer. Apart from CR7, Paolo Maldini, Sami Khedira, Iker Casillas and Ricardo Kaka danced the night away with Priyanka. Check out the  video below:

(The above story first appeared on LatestLY on Jul 24, 2020 11:52 AM IST. For more news and updates on politics, world, sports, entertainment and lifestyle, log on to our website latestly.com).