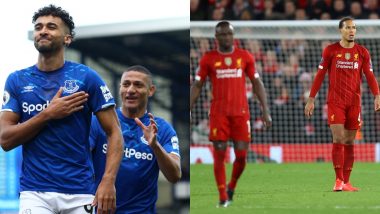 Liverpool will hope to take one more step closer to the elusive Premier League 2019-20 title when they face Merseyside rivals Everton in the league on Saturday. Jurgen Klopp’s men need only six points from their remaining nine matches to clinch their first league title in 30 years. The Reds might, however, have to restart their league campaign without star forward Mohamed Salah, who missed the last training session and also sat out of one practise match. Meanwhile, fans searching for all the tips and team suggestions to pick the best team for the Everton vs Liverpool, Premier League 2019-20 clash, please scroll down for all information. Everton vs Liverpool, EPL 2020: Check Out Predicted Line-Ups for EVE vs LIV at Goodison Park.

Both sides will be playing their first league match after a three-month break due to the coronavirus pandemic and therefore injuries might be more handful in both these teams. Everton are placed 12th in the points table but are seven points off the final European spot (Europa League) and will hope to restart their league campaign with a win in the Merseyside derby. Liverpool Manager Jurgen Klopp Hails Marcus Rashford for Social Work During COVID-19 Pandemic.

The home team will miss Yerry mina, Theo Walcott, Cenk Tosun and Fabian Delph due to injuries. Liverpool have no such injury issues. But Klopp will have to take a tough call on playing Salah and Andrew Robertson both of whom have minor niggles.

Everton vs Liverpool, Premier League 2019-20, Dream11 Team Prediction: Goalkeeper – Liverpool goalkeeper Alisson Becker (LIV) should be picked as the goalkeeper for this fantasy team. The Brazilian custodian is set to resume his duties between the posts for Liverpool after recovering from a hip injury.

With Salah ruled-out, Sadio Mane (LIV) should be made the captain for this fantasy match while Everton striker Dominic Calvert-Lewin (EVE) can be appointed as the vice-captain. A win will take Liverpool only three points shy of lifting their first league title in 30 years. But Everton will want to think otherwise.

(The above story first appeared on LatestLY on Jun 21, 2020 05:43 PM IST. For more news and updates on politics, world, sports, entertainment and lifestyle, log on to our website latestly.com).