The 2022 FIFA World Cup will see the defending champions France drafted with Denmark, Australia and Tunisia in group D. France are the hot favourites to top from group D. 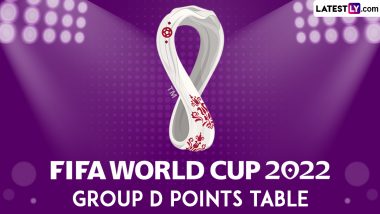 Australia joined France from Group D in the round of 16 as they defeated Denmark 1-0 on Wednesday, November 30. The Socceroos finished second on the table behind France, who topped with the most points (6) but were handed a shock 0-1 defeat by Tunisia, who ended in third place. Denmark on the other hand, remained winless in the competition this time and thus, were handed an early exit. They finished at the bottom of the points table with one point. Where To Watch FIFA World Cup 2022 Online? Go to FIFA+ for Live Scores and Fixtures!

From around the globe, fans are witnessing the action in the highly-awaited 2022 FIFA World Cup, which for the first time ever hosted in the Arab world by Qatar. The 22nd edition of the football World Cup started on November 20 when the host nation took on Ecuador. The final of the biggest 2022 soccer tournament will be played on December 18. 32 teams will compete in the showpiece event with eight groups segmented from A to H for league stages. Group stage matches will be followed by knockouts in which the first round will include 16 teams. FIFA World Cup 2022 Schedule for Free PDF Download Online: Get Football Fixtures, Time Table With Match Timings in IST and Venue Details.

The 2022 FIFA World Cup will see the defending champions France drafted with Denmark, Australia and Tunisia in group D. France are the hot favorites to top from group D. Each team from the group will play against the other three teams once in the group stage. A win for the team will earn them 3 points whereas in case the match gets tied,  the concerned teams will get a point apiece.The winner and runner-up of the group with the most points on the  table will proceed further into the round of 16.

The Group D league stage will kick-start on 22 November when Denmark takes on Tunisia at Education City Stadium. The last match of Group D will be played on 30 November between Australia and Denmark at Al Wakrah Sports Club.

(The above story first appeared on LatestLY on Nov 22, 2022 10:13 PM IST. For more news and updates on politics, world, sports, entertainment and lifestyle, log on to our website latestly.com).