When Is Ballon d’Or 2022? Know Date, Venue and Time in IST of Football Awards Event

The 2021 Ballon d’Or ended with Lionel Messi winning his seventh Ballon d’Or becoming the only player in history to win as many and following him is Cristiano Ronaldo with five Ballon d’Ors to his name. Ronaldo won his last Ballon d’Or in 2017. 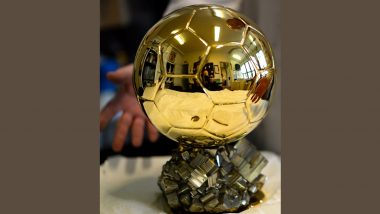 In 2022, the Ballon d’Or will be heading into the 66th edition of the ceremony. This is the first time the results will be given based on the season instead of the yearly performance. The 2022 Ballond’Or will be held in Paris, at the Theatre du Chatelet on October 18, 2022, at 12:00 am IST. The nominees for the 2022 Ballon d’Or were announced on August 12, 2022, and it came as a shock for everyone that the reigning and seven-time Ballond’Or winner Lionel Messi was not nominated for the award for the first time since 2005.

When and Where Will Ballon d’Or 2022 Ceremony Be Held?

The Ballon d'Or 2022 ceremony would be held in the Theatre du Chatelet on October 18, Tuesday.

What Time Will Ballon d’Or 2022 Ceremony Start, in IST?

The Ballon d'Or 2022 ceremony would begin at 12 am IST (Indian Standard Time).

French striker, Karim Benzema is the favourite to win the award as he helped the Spanish giants to win their 35th La Liga and 14th UCL title by knocking out the likes of PSG and Manchester City. Karim was always regarded as one of the best players in the game but due to the massive domination of Messi and Ronaldo, the French men never got the chance to win the Ballon d’Or. After years of hard work the French striker finally might be able to get his hands on the gold.

(The above story first appeared on LatestLY on Oct 16, 2022 08:40 PM IST. For more news and updates on politics, world, sports, entertainment and lifestyle, log on to our website latestly.com).