The India vs Ghana, Commonwealth Games 2022 Hockey match is scheduled to take place on July 30, 2022 (Saturday) at 11:30 pm IST. The game will be held at the University of Birmingham Hockey and Squash Centre in Birmingham. 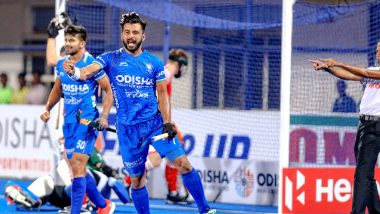 Indian Men's hockey team will kick-start their Birmingham 2022 Commonwealth games (CWG) tussle opposite their pool mates Ghana from Pool B on July 31, 2022 (Sunday). Both the teams will eye an opening win in the pre-eminent showpiece event to set their morale right up for rest of the campaign. Apart from Ghana, India share the pool B alongside Canada, England and Wales. India and Ghana have faced each other quite long ago and it will be for the first time after 40 years that the two teams will confront each other. The last time India met Ghana was at Men's World Cup long back ago in 1975 in which Indian Men's hockey team had managed a 7-0 win. Commonwealth Games 2022 Medal Tally Live Updated.

In the Gold coast 2018 Commonwealth games, Indian Men's hockey team were an inch away to finish on the podium and hence had to wind up their then CWG campaign on fourth place. What backs the Manpreet Singh led Indian hockey side at 2022 CWG is the historic bronze medal win in Olympics at Tokyo last year in 2021 after 41 years. The Indian Men's hockey convoy will take that with them with high hopes and will look to impede the dominance of record time gold medal winners Australia at CWG who have nailed it all six times. Under the guidance of Australian Coach Graham Reid, men in blue have progressed exponentially as a team.

The India vs Ghana Men's Commonwealth Games 2022 Hockey match is scheduled to take place on July 31, 2022 (Sunday) at 08:30 pm IST. The game will be held at the University of Birmingham Hockey and Squash Centre in Birmingham.

Sony Network have acquired the broadcasting rights of the multi-nation competition in India. Fans would be able to watch the 2022 Commonwealth Games on Sony Sports SD/HD channels on their TV sets. Sony TEN 3 and Sony Six will likely televise the IND vs GHA Men's Hockey Match in English and regional languages.

SonyLIV, the official OTT platform of Sony Network, will provide the live streaming of the IND vs GHA Hockey match in India. Fans can tune into the SonyLIV app and website to catch the live action on online platforms.

Indian men's hockey team held a 27 days long preparatory session at National Camp at the SAI center in Bengaluru from June 27 to July 23 ahead of the 2022 CWG. Manpreet Singh led Indian team along with chief coach Graham Reid had landed at Birmingham on 24th July for the quadrennial event, immediately after ending their preparation camp back at home.

(The above story first appeared on LatestLY on Jul 31, 2022 02:49 PM IST. For more news and updates on politics, world, sports, entertainment and lifestyle, log on to our website latestly.com).