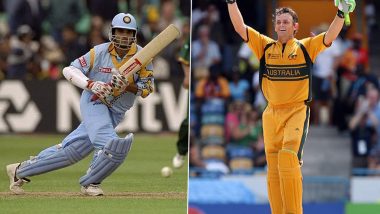 In a right-handed dominated world, someone who is lefty and performs his/her day to day chores with left-hand is considered distinctive. This sui generis nature of humans calls for a celebration, hence International Lefthanders Day is celebrated on August 13 every year. In cricket, a left-handed batsman or bowler is always overhyped and treasured more than a right-handed batsman. In some ways, left-handed batters are considered to look more debonair while batting. Let's take a look at some left-handed batsman on the International Lefthanders Day 2022 who have been cricketing greats. The list actually could have been endless but we try to name a few.

Brian Lara: The Caribbean left-handed batting great had his unique aura and would set the opposition at awe while being on the crease. Lara is one of the legends of Test cricket who loved toying with the bowlers at will. He is among the most successful batters of all time with some record breaking performances against his name. His record of highest individual Test score (400 not out) is yet to be broken by anyone. The left-hand batter has scored over 22,000 runs combined in ODIs and Test cricket which consists of 53 hundreds.

Sourav Ganguly: He was one of the most versatile left-handed batters of India. Ganguly's signature shot of stepping down the ground to a medium pacer or spinner, to lift the ball in the mid-wicket is carved in everyone's mind who is a Dada fan.He was aptly known as God of Offside for his elegant strokes. Apart from his batting prowess, the left-hander is also remembered for changing the face of Indian cricket forever after he was appointed as the captain of the national side. Sourav Ganguly To Be Back in Action at Eden Gardens on September 15, To Lead India Maharajas vs World Giants in Legends League Cricket as Part of 75th Independence Day Celebrations.

Kumar Sangakkara: Sangakara is considered among the greats of the sport and one of the best Wicket-keeper batsman of his time. He played as a top-order batsman for Sri Lanka and in his cricketing career, Kumar garnered 26635 runs in 404 ODIs and 134 Tests collectively. He owns the number one spot in the list of most dismissals by a Wicket-keeper, beating some of the big names in the business during his time.

Yuvraj Singh: His left-hand signature flick would send waves of jubilation across the stands among his fanatics, while batting. Yuvraj Singh has been among the match-winning players for India. His sensational cover drives, shots over backward point and mid-wicket were all class. Yuvraj Singh had cemented his place in the Indian team as a vital asset and was a major peg in the middle order for India.

Adam Gilchrist: The Australian wicketkeeper-batsman was known for his aggression with the bat during his playing days. Even in Test cricket, Gilchrist would pace his innings irrespective of the situation and would often change the course of the game with his effective stroke play.

(The above story first appeared on LatestLY on Aug 13, 2022 07:00 AM IST. For more news and updates on politics, world, sports, entertainment and lifestyle, log on to our website latestly.com).