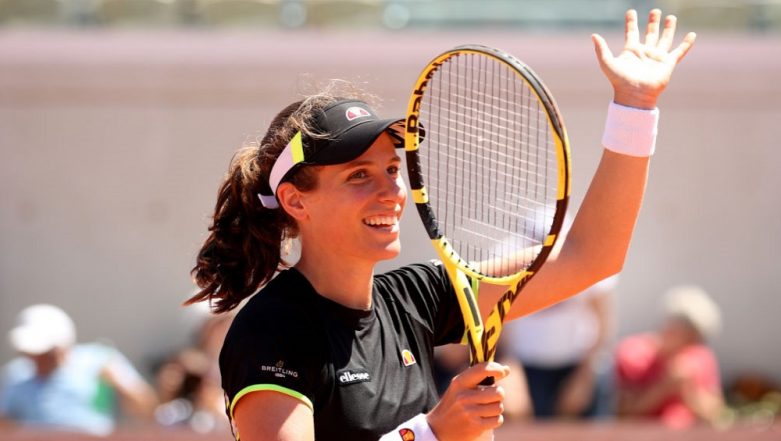 Paris, June 2: The United Kingdom's top female tennis player Johanna Konta on Sunday prevailed over Donna Vekic of Croatia 6-2, 6-4 to secure her maiden French Open quarterfinals appearance. The Sidney-born player to Hungarian parents who became British citizen in 2012 sealed her fourth win over the Croatian in 84 minutes to become the first Briton to make to Roland Garros last-8 since 1983.

Both players had a shaky start. They traded service breaks once apiece over the first couple of games. But Konta took control and broke her opponent's serve and then held her own delivery to grab a 3-1 lead, reports Efe news. Vekic's hope for a comeback received a blow as she conceded her serve once more to trail 5-2. But she never gave up and carved out several break points while Konta was serving for the set. French Open 2019: Roger Federer Cruises Into Quarter-Finals for 12th Time, Becomes Oldest Man in 28 Years to Achieve the Feat.

After a marathon eighth game, which featured four deuces, Konta won the set after 38 minutes of play. The second set witnessed all the action in the last couple of games as both players once again traded service breaks with Konta taking a 4-3 lead only to see her serve broken in the following game. But Konta then broke her opponent's serve for one more time to take a 5-4 lead and then easily held her serve to win the contest.

Konta now is one win away from equalling her best Grand Slam run, having qualified for the 2016 Australian Open semis and the 2017 Wimbledon last-4. In another round of 16 action, Petra Martic of Croatia, seeded No. 31, rallied from a set down to earn a 5-7, 6-2, 6-4 win over Kaia Kanepi of Estonia.