WWE News: From The Undertaker Speaking About Wrestler’s Court, AJ Styles Taking a Shot at Paul Heyman to Rey Mysterio’s Contract Extension, Here Are 5 Interesting Updates to Watch Out For 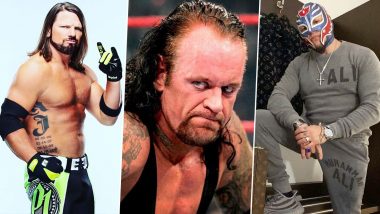 There are a lot of things happening in WWE and fans are always eager to know about their favourite superstars. This past week we have witnessed one of the best wrestling actions of 2020, as Extreme Rules pay per view were filled with some gruesome matches, then we saw Randy Orton take out Big Show through punt kick at Raw. Also, not to forget WWE NXT, where Keith Lee relinquished his NXT North American Title in order to give the opportunity to other superstars to grow. Meanwhile, we bring to you to five updates and news from WWE which include The Undertaker speaking about wrestler's court, AJ Styles Taking Shot at Paul Heyman, Rey Mysterio's contract extension and many more. WWE News: From Roman Reigns Flaunting Fit Physique, Kairi Sane Leaving Raw to Brock Lesnar Not Making a Return at SummerSlam 2020, Here Are 5 Interesting Updates to Watch Out For

1. The Undertaker Speaks About Wrestler's Court

The Undertaker after his retirement from WWE has still managed to maintain his popularity amongst fans. He comes up with exciting unknown facts about his life and colleague wrestlers on the episode of The Last Ride which telecast on WWE Network. The Deadman recently spoke about wrestler's court on the latest episode of The Last Ride. The wrestler mentioned that wrestler's court was a place where superstars used to settle their differences backstage. Undertaker felt that it was just a light-hearted way to address the backstage issues. Former wrestler Godfather revealed that guilty wrestlers used to get penalties like buying alcohol or paying their transit. WWE NXT July 22, 2020 Results and Highlights: Keith Lee Relinquishes North American Title; Karrion Kross Defeats Dominik Dijakovic to Continue His Winning Streak (View Pics)

The main reason why AJ Styles moved to SmackDown from Raw was due to Paul Heyman, former Executive Director of the red brand. The Intercontinental Champion has at that time addressed Heyman as a liar. Further, he has also held Heyman responsible for the release of Luke Gallows and Karl Anderson. While speaking on a Twitch stream, AJ Styles said that it was almost kinda hard to find somebody who liked Heyman. The Phenomenal One also stated that he "couldn't stand to look" at Brock Lesnar's 'Advocate' by the end.

Rey Mysterio has been fighting in WWE without a contract since the past three months. The Master of 619 hasn't renewed his two years contract which he had signed in the year 2018. Mysterio lost to Seth Rollins at Extreme Rules 2020 where his eyes got popped out as per storyline. As per wrestling experts Dave Meltzer latest revelation on Wrestling Observer Radio, Rey Mysterio will most probably sign the contract extension with WWE. The storyline will then continue as WWE has saved Mysterio's eye and he will return back to ring to continue his feud with Seth Rollins. Rey Mysterio Injury Update: WWE Medical Staff Optimistic For ‘Master of 619’ Maintaining His Vision.

Liv Morgan recalls a wardrobe malfunction incident when she crashed Lana and Bobby Lashley’s wedding on the episode of Raw. Morgan in her latest tweet revealed her outfit didn’t call for a bra so she taped down but decided to put on a bra at the last second. Putting a bra on the last moment proved to be fortunate for her, as her top broke during that segment. Let us see below what WWE Diva has to say about this.

Thinking back to when I crashed lanas wedding...my outfit did NOT call for a bra. I taped down (ladies u know what I mean) and very last second I put on a bra. And thank GOODNESS cause my top BROKE 🥵🥴

Stephanie McMahon recently appeared on this past week episode of Raw to book Sasha Banks and Asuka in Extreme Rules 2020 Women's Title rematch, where Bayley will not be allowed to interfere. In the recent interview with Ad Age Remotely, the Chief Brand Officer of WWE stated that WWE is taking every possible step to avoid the spread of coronavirus disease. Stephanie stated that they also have an application of a product that creates a barrier between the virus and surfaces. She further went on to say that that if someone tests negative for the virus, they still need a temperature check and fill out a form.

WWE fans will now look forward to the upcoming episode of SmackDown where it will be interesting to see how Matt Riddle reacts to the attack made on him by King Baron Corbin. Matt Riddle also lost a hard-fought battle with AJ Styles for Intercontinental Title on the previous week episode of SmackDown. Stay tuned with LatestLY for more exciting news and updates from WWE.

(The above story first appeared on LatestLY on Jul 24, 2020 09:01 AM IST. For more news and updates on politics, world, sports, entertainment and lifestyle, log on to our website latestly.com).