After launching the Moto Edge 30 smartphone in Europe, the company is gearing up for the Indian launch. Motorola India has teased the device on its official Twitter account. 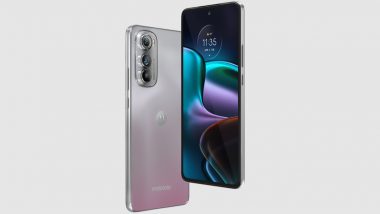 After launching the Moto Edge 30 smartphone in Europe, the company is gearing up for the Indian launch. Motorola India has teased the device on its official Twitter account. According to tipster Mukul Sharma, Moto Edge 30 could debut on May 12, 2022. It will be the world's thinnest 5G smartphone and the lightest in the segment. In addition to this, Sharma revealed that Moto Edge 30 will come powered by a Snapdragon 778G+ SoC. Motorola Edge 30 With Snapdragon 778G+ SoC Launched in Europe.

Moto Edge 30 Indian model will carry similar specifications as that of the European variant. Moto Edge 30 will sport a 6.5-inch FHD+ AMOLED display with a refresh rate of 144Hz.

Prepare yourself to meet a smartphone that’s the world’s thinnest, lightest in the segment & India’s first to be powered by the blazing-fast Snapdragon 778G+ 5G processor. Launch Date revealing tomorrow! #FindYourEdge #WorldsThinnest5G pic.twitter.com/Rz6uytTJDz

The handset will come powered by a Qualcomm Snapdragon 778G+ SoC coupled with 8GB of RAM and up to 256GB of internal storage.

For optics, the device will get a triple rear camera setup comprising a 50MP main camera, a 50MP ultra-wide-angle lens and a 2MP depth shooter. Upfront, there will be a 32MP shooter. The handset is expected to pack a 4,020mAh battery with 33W TurboPower charging support. Coming to the pricing, Moto Edge 30 is expected to retail at Rs 30,000.

(The above story first appeared on LatestLY on May 06, 2022 11:47 AM IST. For more news and updates on politics, world, sports, entertainment and lifestyle, log on to our website latestly.com).