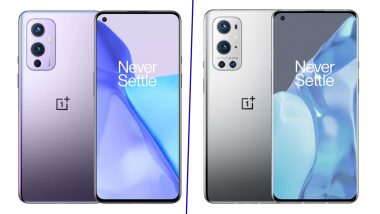 Beijing, March 23: OnePlus has confirmed that the OnePlus 9 series in China will run on ColorOS instead of the HydrogenOS. OnePlus CEO Pete Lau took to Weibo to announce that the OnePlus 9 series will run on ColorOS 11 out-of-the-box in the country, reports Beebom. The user interface also shipped with Realme-branded phones for a while before they announced their own skin called realme UI. OnePlus 9, OnePlus 9 Pro, OnePlus 9R & OnePlus Watch Launching Today in India; Watch LIVE Streaming of OnePlus 9 Series Launch Event Here.

OnePlus 9 series will be launched on Tuesday in India while it will be launched in China a day later. The smartphones are expected to come with a low-temperature polycrystalline oxide (LTPO) panel with adaptive refresh rates from 5Hz to 120Hz. The resolution of the screen is said to be 2K+, which is how the Chinese companies often mislabel QHD+ or 1440p.

A low-temperature polycrystalline oxide (LTPO) display is a special kind of backplane technology designed for OLED screens. OnePlus is likely to launch the OnePlus 9 series with 65W fast charging support. The OnePlus 9 and 9 Pro are likely to feature a 4,500 mAh battery.

OnePlus 9 Lite will borrow a lot from the recently launched OnePlus 8T. It may feature a 90Hz or 120Hz AMOLED display, and a quad-camera setup similar to the OnePlus 8T. It will even get super-fast 65W Warp Charge support. The OnePlus 9 and 9 Pro will feature Qualcomm's latest 5nm chipset, the Snapdragon 888, but the OnePlus 9 Lite will be powered by the Snapdragon 865 instead. Meanwhile, the OnePlus 9 is reported to feature a 6.55-inch full-HD+ (1,080x2,400 pixels) display with a 120Hz refresh rate and a 20:9 aspect ratio. The handset may ship with 8GB of RAM, 128GB of storage, and OxygenOS based Android 11 OS.

(The above story first appeared on LatestLY on Mar 23, 2021 12:45 PM IST. For more news and updates on politics, world, sports, entertainment and lifestyle, log on to our website latestly.com).