OnePlus Nord 2 Likely To Be Launched Instead of Nord SE: Report

OnePlus, the Chinese smartphone maker is rumoured to introduce a new Nord device. We had come across several leaks and rumours about the launch of the new Nord SE phone. 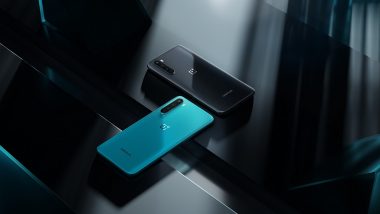 OnePlus, the Chinese smartphone maker is rumoured to introduce a new Nord device. We had come across several leaks and rumours about the launch of the new Nord SE phone. However, now a new report has revealed that the Nord SE launch might not take place. A tipster who goes by the name Max Jambor has revealed that Nord SE i.e. the Special Edition of the original Nord will be dropped by the company. OnePlus Nord N10 5G, Nord N100 Smartphones Officially Launched.

The company is reportedly working on another Nord smartphone called Nord 2 and is expected to be launched soon. The original Nord phone was launched in July last year. So we expect the OnePlus Nord 2 to debut in July. Although nothing much has been leaked about the upcoming Nord device, several new reports have claimed that the upcoming device will be a mid-range 5G smartphone and could be powered by MediaTek Dimensity 1200 SoC.

For optics, the handset is expected to come with a quad rear camera setup and dual front cameras. The handset might get an AMOLED display, a high refresh rate, 30W fast charging support and could run on Android 11 based OxygenOS. OnePlus is also speculated to launch OnePlus Nord N10 5G successor in India. However, all this is speculation and should be taken with a pinch of salt.

(The above story first appeared on LatestLY on Mar 30, 2021 05:19 PM IST. For more news and updates on politics, world, sports, entertainment and lifestyle, log on to our website latestly.com).