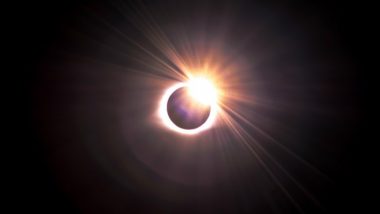 For the sky watchers, 2019 is indeed a great start as a few selected locations on the planet will get two celestial opportunities to witness—a partial solar eclipse and a total lunar eclipse. At first, the partial solar eclipse or Surya Grahan of the year will take place tomorrow, January 6. The astronomy enthusiasts in parts of North-East Asia and the Pacific Ocean, will be able to see the celestial phenomenon. Hence, the Indian subcontinent will not be able to watch the moon that briefly appears to take a bite out of the sun. Know Date, Timings, Where and How to Watch The Celestial Event of Surya Grahan.

The first celestial event of the year will take place on January 6 at 23:34 UTC, (Coordinated Universal Time) and the phenomenon will last till 03:38 UTC. According to the Indian Standard Time, the partial solar eclipse will occur from 5:00 am to 9:18 am tomorrow. Super Blood Wolf Moon 2019 Date and Timings: Know About The Rare Astronomical Phenomenon Occurring in January.

Where Will Surya Grahan Be Visible in India?

Unfortunately for the Indian sky gazers, the first partial solar eclipse of 2019 will not be visible in India. People living in the locations of North Pacific and northeast Asia, including China, part of Siberia in Russia, the Korean peninsula and Japan will be able to witness the celestial occurrence. This partial solar eclipse duration has not been highlighted by NASA in its calendar which tracks almost all the solar and lunar eclipses for the coming decades.

An eclipse is a celestial event which occurs when the Sun, Moon and Earth are aligned in a straight line. During a solar eclipse, the Moon blocks the Sun’s path which stops the sunlight from reaching the Earth. It turns dark during a total solar eclipse. However, a partial solar eclipse is when the Moon covers only a particular portion of the Sun, making it appear as a disk.

(The above story first appeared on LatestLY on Jan 05, 2019 06:35 PM IST. For more news and updates on politics, world, sports, entertainment and lifestyle, log on to our website latestly.com).