World's Largest Iceberg Forms In Antarctica; What Happens Now That The Iceberg Is Broken Off The Ice Shelf

The world's largest Iceberg - classified as A-76 - and spanned at 4,320 sq km (1,668 sq miles) was sheared off the edge of Antarctica Ronne ice shelf and into the Wendall Sea. The calving of Ice-Bergs from Ice Shelves is not by any means an unprecedented event. It is merely a part of a natural cycle. 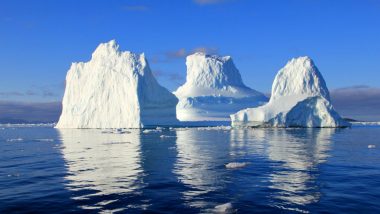 The world's largest Iceberg - classified as A-76 - and spanned at 4,320 sq km (1,668 sq miles) was sheared off the edge of Antarctica Ronne ice shelf and into the Wendall Sea. The Iceberg akin to the size of the Spanish Island of Majarco that spans 3,640 km - perhaps slightly bigger than the island - calved off in recent days and is presently afloat in the world.

A-76, which measures 175km (106 miles) long by 25km (15 miles) wide, was spotted in recent satellite images captured by the Copernicus Sentinel-1 mission, the space agency said in a statement posted on its website with a photo of the enormous, oblong ice sheet.

Iceberg A-76 calves from the western side of the Ronne Ice Shelf in the Weddell Sea and is currently the largest iceberg in the world. pic.twitter.com/Z0JrF85yKV

Ronne Ice Shelf In Antarctica is a large body of floating ice at the edge of the Wendall Sea. The calving of Icebergs from Ice- shelves is not by any means an unprecedented event.  The break up is merely a  part of a natural cycle.

In 2017, A68, as it was known, spanned an area of nearly 6,000 sq km (2,300 sq miles), roughly the size of Delaware in the U.S., broke away from an Ice Shelf Antarctica. It was touted to be the biggest Iceberg out in the sea at the time of its calving from the Larson C Ice Shelf on the edge of the Antarctic Peninsula. Over time, the Iceberg just melted away, now making A-76 the Iceberg of the hour. It surpasses A-23A, about 3,380 square km (1,305 square miles) in size and also floating in the Weddell Sea.

The Iceberg floating at sea will not contribute to the rise in sea levels, says Scientist, who seem unperturbed by the event. Scientists widely believe that the incident is a natural progression, and will not lead to any calamities. The ice shelf is already floating, so when a part of it detaches — such as the iceberg — no extra water is displaced.

While Climate change has impacted the rapid disintegration of Ice-shelves in Antarctica, the calving incident is merely a part of natural progression.

(The above story first appeared on LatestLY on May 20, 2021 12:17 PM IST. For more news and updates on politics, world, sports, entertainment and lifestyle, log on to our website latestly.com).