It's been weeks since the documentary started airing on Netflix and Facebook (one of the many sites named) has finally issued its response in regards to same. 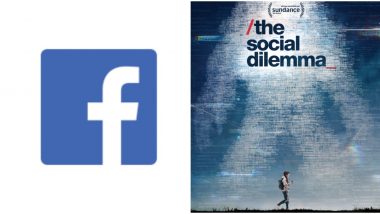 Netflix's recent documentary, The Social Dilemma, was quite an eye-opener for the ones who never realised how these social media websites work really. The documentary has tried to highlight the perils of the modern-day, internet-obsessed world and how media giants manipulate you for their selfish gains. It's been weeks since the documentary started airing on Netflix and Facebook (one of the many sites named) has finally issued its response in regards to various allegations hurled at them in the same. 'The Social Dilemma' on Netflix Which Talks About Evils of Social Media Has Impressed Netizens So Much That They Cannot Stop Recommending it... on Social Media!

In response to the allegations that social media websites have made their users addicted to this online culture, the media giant said it is, in fact, working to mitigate the threat of addiction by funding research and working with mental health experts, among other things.

Facebook insists that "This (ad-supported) model allows small businesses and entrepreneurs to grow and compete with bigger brands by more easily finding new customers. But even when businesses purchase ads on Facebook, they don’t know who you are. We provide advertisers with reports about the kinds of people who are seeing their ads and how their ads are performing, but we don’t share information that personally identifies you or sell your information to anyone." The Social Dilemma Review: Why You Should NOT Be Missing This Netflix Documentary That’s More of a Warning to Be Seriously Heeded.

When it comes to the issue of data collection, Facebook says, "We do not want this data and we take steps to prevent potentially sensitive data sent by businesses from being used in our systems. We have called publicly for regulators around the world to join us in helping to get the rules of the internet right and we support regulation that can guide the industry as a whole."

The social media says that polarising content is a tiny percentage of what’s on the company’s platform.“We've removed more than 100 networks worldwide engaging in coordinated inauthentic behaviour over the past couple of years, including ahead of other major global elections since 2016," it said while also adding that in three months between March and May 2020, it has removed over 1 lakh pieces of content for violating voter interference policies.

"The Social Dilemma" is now streaming on Netflix in over 190 countries around the world! We’re so grateful to our incredible team, cast, subjects, and partners who made #thesocialdilemma possible. This film meets the world in the midst of a global pandemic, ongoing racial justice mobilizations, a major presidential election, and a new socially distant school year. As many of us look to certain technologies for much-needed connection, if left unchecked, this power can undermine our democracy, mental health, and human rights. Now is the moment to come together and ignite a global conversation about our shared social dilemma and how we can realign technology with the interest of people, not profits. Watch today on Netflix and join us on 9/16 at 8:30 PM Eastern Standard Time for our Roundtable Q&A to dive deeper into the issues. Learn more at www.thesocialdilemma.com.

Finally, the media giant agrees the claims have been made by their ex-employees but also insists that they aren't aware of all the recent safety protocols taken or initiated by them. "We know our systems aren’t perfect and there are things that we miss. But we are not idly standing by and allowing misinformation or hate speech to spread on Facebook,” quoted the company.

(The above story first appeared on LatestLY on Oct 03, 2020 10:32 AM IST. For more news and updates on politics, world, sports, entertainment and lifestyle, log on to our website latestly.com).