Russia Says No Victory Day Parade in Mariupol, US Issues Security Alert for Its Citizens in Moscow

As Moscow holds the dress rehearsal of the Victory Parade today, Russia has said that the May 9 event cannot be held in Mariupol, the war-devastated port city in southeastern Ukraine. 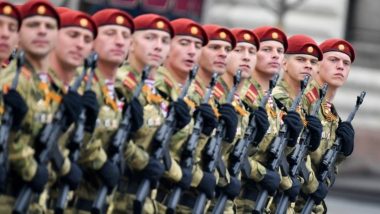 New Delhi, May 7: As Moscow holds the dress rehearsal of the Victory Parade today, Russia has said that the May 9 event cannot be held in Mariupol, the war-devastated port city in southeastern Ukraine. Over the past few days, many reports had highlighted that the Russian military was planning a grand parade in the ruined city, some even suggesting that the planned procession would feature the Ukrainian prisoners of war.

However, Russian President Vladimir Putin's Press Secretary Dmitry Peskov confirmed on Friday that the May 9 parade cannot be held in Mariupol this year, but "the time will come and there will be a wide celebration." Russia-Ukraine War: ‘Don’t Blame Us for the Global Food Security Crisis’, Says Russian Foreign Ministry.

Sergei Kiriyenko, the First Deputy Head of the Russian presidential administration, also stated that the procession of the 'Immortal Regiment' - the all-Russian public civil-patriotic movement - cannot be held in Donetsk and Luhansk on this Victory Day.

"There will certainly be Russians there, and there will be many Russians on May 9. But I don't know about any official delegation. It has already been said that this year, of course, this is impossible for obvious reasons. But the time will come, and there will be a wide celebration," Russian state-owned news agency RIA Novosti quoted Peskov as saying on Victory Day celebrations in Mariupol.

Meanwhile, Vitali Klitschko, the Mayor of Kiev who is also a former heavyweight boxing champion, has announced that no events dedicated to Victory Day will be held in the Ukrainian capital on May 8-9 due to the imposition of martial law.

"Also, please do not ignore the air alarms and immediately follow to the shelter. In the coming days, there is a high probability of rocket fire in all regions of Ukraine. Be aware and take care of your own safety!" Klitschko wrote on his Facebook page.

In Moscow, the United States embassy issued a 'security alert' cautioning the US citizens to avoid public gatherings and festivities during the annual Victory Day celebrations, including the main parade in Red Square, and also asking them to have a contingency plan that does not rely on US government assistance.

"In the past, there have been heightened police presence surrounding these events. Given the ongoing tensions, US citizens should avoid large public gatherings. Be aware of your surroundings and stay alert in locations frequented by tourists/Westerners," the warning stated.

Monday would mark the 77th anniversary of Soviet Union's victory over Nazi Germany in World War II. The Great Patriotic War, as the Russians call it, began on June 22, 1941 and left deep scars in the minds and souls of each Soviet family by the time it got over in 1945, leaving over eight million Soviet soldiers dead.

On May 8, 1945 at 22.43 (May 9 at 00.43 Moscow time) Nazi Germany signed the act of unconditional surrender. By decree of the Presidium of the Supreme Soviet of the USSR, May 9 was declared Victory Day. In the decree, May 9 was declared "a day of nationwide celebration in commemoration of the victorious end of the Great Patriotic War of the Soviet people against the Nazi invaders and the historic victories of the Red Army, which culminated in the complete defeat of Nazi Germany, which announced its unconditional surrender."

Russia considers the day an important milestone in world history that has determined the face of modern times as it liberated Europe and the whole world from Nazism due to the "decisive contribution" of the Soviet Union.

"Today, when the 'politicisation of history' is becoming a reality of world politics, our efforts will be directed towards resisting attempts to revise the history of the Second World War, preserving the historical truth about the true role and place of the Soviet Union in the fight against the criminal ideology of Nazism, and creating a modern system of international relations," said Alexei Zaitsev, the Deputy Director of the Information and Press Department of the Russian Foreign Ministry.

After the collapse of the USSR, parades on Victory Day were not held for some time but were resumed in 1995. The tradition of holding military parades on Red Square in Moscow with the participation of military equipment was also resumed in 2008.

Hundreds of units of military hardware, including legendary equipment and the cutting-edge modern weapons and strategic bombers, are on show during the parade with the Russian President in attendance.

According to the established tradition, meetings of veterans, solemn events and concerts are held on Victory Day. Wreaths and flowers are laid at monuments of military glory, memorials, mass graves, and guards of honour are put up. Memorial services are held in churches and temples of Russia.

Russian Defense Minister Sergey Shoigu said earlier this week that this year's parade will take place in 28 cities of the country and will involve over 65,000 personnel, 2,400 weapon systems and more than 460 aircraft.

(The above story first appeared on LatestLY on May 07, 2022 06:58 PM IST. For more news and updates on politics, world, sports, entertainment and lifestyle, log on to our website latestly.com).