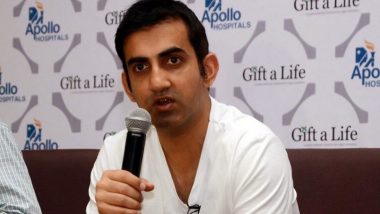 New Delhi, May 20: Gautam Gambhir reckons that playing international cricket is not a prerequisite to become a successful T20 batting coach, whose job according to the former India opener is to help players cultivate a positive mindset.

The cricketer-turned-politician said that a batting coach can be appointed exclusively for the shortest format of the game. Gautam Gambhir Slams Shahid Afridi Over Controversial Kashmir Remarks, Says 'Jokers Like You Can Spew Venom Against India'.

"Probably you can just have a different T20 batting coach, just for that particular format. It is really not true that someone who hasn't played international cricket or who hasn't played enough cricket, can't become a successful coach," Gambhir said on Star Sports' show 'Cricket Connected'.

The World-Cup winning opener said that job of the batting coach in T20 cricket is not to teach how to hit shots.

"No one teaches you how to hit a lap shot or a reverse lap shot, no coach can do that. If someone is trying to do that to a player, he is harming him more than actually making him a better player." However, Gambhir is of the opinion that being a successful player helps become a better selector.

"It's not important that you have played a lot of cricket, for you to be a very successful coach - probably, that's right for a selector, but not for a coach."