The scheme has seen higher demand in Haryana, Uttar Pradesh, Bihar, Bengal, Odisha and Gujarat, where work allocation has increased more than 50 per cent on-year in the first four months. 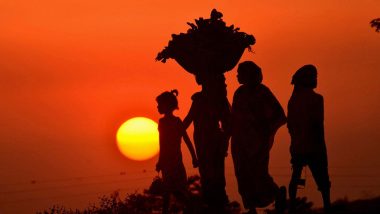 Mumbai, August 25: The rural distress following the pandemic has seen the average monthly income per person under the Mahatma Gandhi National Rural Employment Guarantee Act, 2005 (MGNREGA) doubling to around Rs 1,000 in the first four months of the fiscal from Rs 509 in FY2020, according to an analysis by Crisil.

The April-July period typically sees around 25 per cent more work execution in terms of person-days under the scheme compared to the rest of the year, thereby aiding rural income. This is understandable as tens of millions of workers have returned home jobless from cities due to the pandemic driven lockdowns. Coronavirus in India: Only 2% COVID-19 Patients in ICU, Less Than 1% on Ventilator Support, Says Health Ministry.

"This fiscal, however, these four months saw a growth of 46 per cent on-year in person-days, coupled with an increase of 12 per cent in average wage under the scheme thanks to the pandemic, which has pushed urban labourers back into their villages," says the report. The scheme has a mandate of providing at least 100 days of jobs in a financial year to every rural household.

Even after considering the revised allocation, more than 50 per cent of the funds have been spent in the first four months of the fiscal. The scheme has seen higher demand in Haryana, Uttar Pradesh, Bihar, Bengal, Odisha and Gujarat, where work allocation has increased more than 50 per cent on-year in the first four months. Mumbai's COVID-19 Death toll Falls to Lowest in Over 100 Days, Civic Officials Reportedly Cite Low Reporting During Weekend & Due to Festival Time.