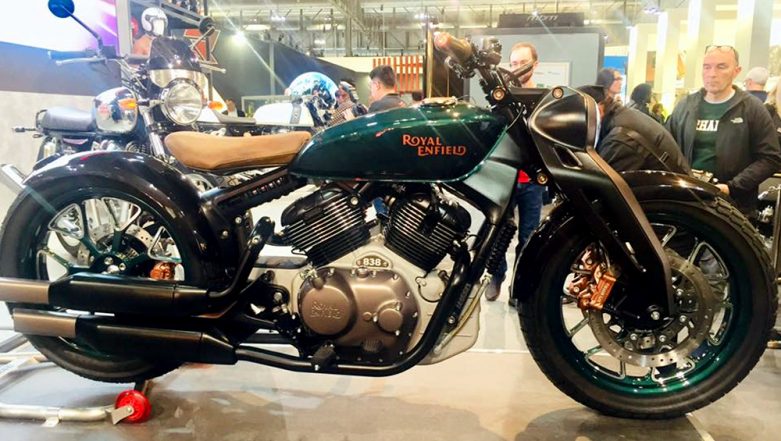 Royal Enfield, a home-grown two-wheeler manufacturer based in Chennai has surprised the auto industry by unveiling the new Royal Enfield Concept KX, which is the modern day reincarnation of the 1938 version. The company has claimed that KX Concept project was initiated to exhibit the talent of the design team and it took just 6 months for the team to design the motorcycle from scratch. Moreover, the company is also scheduled to launch the new Royal Enfield 650 Twins in India by mid of this month. Diwali 2018 Offers & Discounts on Scooters Under Rs 60000; Honda Activa 5G, Suzuki Access, TVS NTorq & Hero Maestro Edge.

The motorcycle pays homage to the legendary Royal Enfield KX which was launched way back in the year 1936. The new KX Concept from Royal Enfield borrows design cues from the 1938 model, however, the company has managed to give a modern and unique look. The motorcycle is powered by V-Twin 834 cc engine, however, the company didn’t reveal any details about the new motor. Diwali 2018: Offers & Discounts on Maruti Cars in India; Get Up to Rs 75,000 Discounts on Maruti Alto, Swift, Dzire, WagonR & Ertiga.

Marketed as 'The Last Word in Luxury Motorcycling', the Royal Enfield KX had a claimed top speed of 129 kmph. Following the same design language as that of vintage motorcycle, the new 838cc KX concept gets dark bottle-green shade with modern elements such as complete digital console, LED lights, alloy wheels and much more. As far as the engine details are concerned, the motorcycle gets a 834cc, liquid cooled, fuel injected, V Twin engine that is capable of making maximum power of 90 PS power against peak torque of 100Nm.