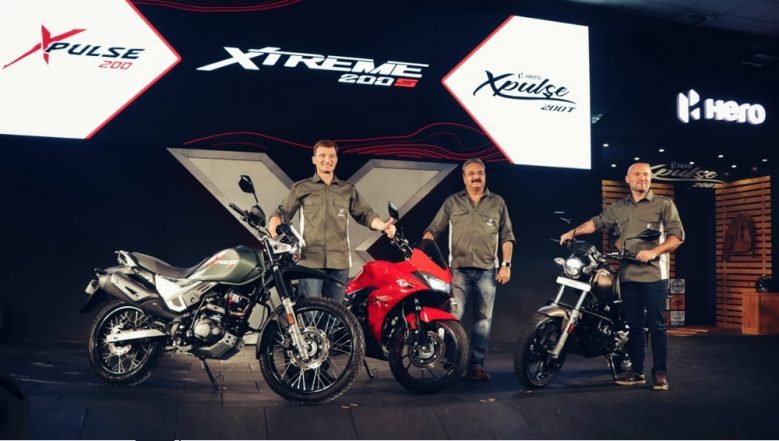 Though XPulse 200 shares same frame with Xtreme 200R, there are several changes that can be easily noticed such as high-mounted mudguard, engine bash plate, swept-up exhaust and knuckle guard and much more. The bike comes with dual purpose Ceat tyre shod in 21-inch spoke wheels upfront and 18-inch spoke wheel at the rear.

Entering a new era of premium biking. Presenting the next-gen motorcycles for youth around the world. #XPulse200 #XPulse200T #Xtreme200S pic.twitter.com/OSAF6MATik

On the other hand, XPulse 200T which is a touring derivative comes with alloy wheels, conventional mounted exhaust, road-suited tyres, relaxed ergonomics and more. Both the motorcycles are equipped with a digital instrument cluster featuring smartphone connectivity through Bluetooth, turn-by-turn navigation, full-LED headlamp, LED taillight and much more.

Mechanically, both the versions of XPulse 200 are powered by the same 200cc, single-cylinder, air-cooled engine which is straightaway lifted from Xtreme 200R. The engine is tuned to produce 18.4 bhp of maximum power against peak torque of 17.1 Nm. The mill is mated to a 5-speed gearbox. The motorcycle comes with long travel telescopic suspension at the front and there is a monoshock setup at the back. The braking duties on the bike are carried out by disc brake at both the ends with single-channel ABS as standard.

Being the most affordable ADV motorcycle in the country, the newly launched Hero XPulse 200 doesn't have a direct competition in the 200cc segment. However, the bike is way cheaper than the next adventure tourer bike, which is Royal Enfield's Himalayan. It is important to note that the Hero XPulse is approximately Rs 60,000 cheaper than the Himalayan. The company will be commencing the deliveries for the bike by the end of May whereas the bike dispatching will be initiated later this month.