Angrezi Medium Movie Review: Irrfan Khan Gets Love from Twitterati, the Movie Not So Much

Irrfan gets all the love and support from Twitterverse but Angrezi Medium receives mixed reactions. 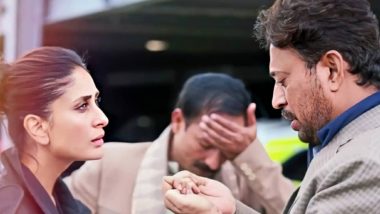 Irrfan Khan's next big outing after his battle with cancer is Homi Adajani's Angrezi Medium that hits the screens today. While critics are lauding the actor's performance and that shouldn't be surprising, they aren't really appreciating the film's plot and are tagging it as underwhelming. But when it comes to Twitterati, they're busy showering this new release with heaps of praises, well almost. The Twitterverse is clearly in favour of this Irrfan, Kareena Kapoor Khan starrer, however, a certain section exists who isn't really happy with the final product. Angrezi Medium Full Movie in HD Leaked on TamilRockers & Telegram Links for Free Download and Watch Online: Irrfan Khan’s Film Becomes the Latest Victim of Piracy?

After scrolling through all the reactions, it's safe to declare that Irrfan has received the loudest of cheer for his earnest performance. And that's only natural. The actor is known for being a powerhouse of talent and he actually owns every scene and frame that he's a part of. Check out reactions where Twitterati can't stop singing in his praises and the ones where they can't stop criticizing Homi Adajani's new directorial. Radhika Madan Paints a Colourful Picture with Her Sukriti & Aakriti Designed Outfit for Angrezi Medium Promotions.

Irrfan is Brilliant, the Movie Not So Much

#AngreziMedium is a Decent film but nowhere close to #Hindimedium. The film works in parts but the flow is narrative due to unrelatable subplots is missing. @irrfank is brilliant & Delight to watch on Big Screens Deepak Dobriyal is Hilarious. @radhikamadan01 Sincere.

Watched #AngreziMedium it was a super movie . it's a must watch Movie for everyone with family

its a complete combo pack dhamaka of comedy & emotions with a very good message.

i like it very very much. @irrfank Sir May god bless you

i hope it will be a blockbuster .

Blame it on Coronavirus

Watched #AngreziMedium when the markets were crashing and enjoyed it. Would have enjoyed it more if I wasn’t worried about the markets.

Emphasis on education a father pain who juggles money,Visa

A daughter who want to study abroad@irrfank sir u r superb like always@radhikamadan01 ma'am I'm watching u in only serial bt u r outstanding in this movie..

Hats off to all C*

#AngreziMedium is little dragged screenplay could have been better . A good watch 👍

Only Plus Point is #Irrfan

The Film Lacks a Soul

#AngreziMedium - A DECENT Film#IrrfanKhan & #DeepakDobriyal are the lifeline. Film has both emotions & humour as promised by the trailer but lacks consistency. It entertains in parts. Direction is average. Editing is weak. One Time Watch!

A Waste of a Powerful Star Cast

What a waste of a great cast of #AngreziMedium . The film just keeps dragging itself to unnecessary things instead of focusing on the core issue. Potential ruined entirely. Feel bad for Irrfan Khan and Deepak Dobriyal, they were so amazing in the film.

The outbreak of coronavirus in the country will affect Angrezi Medium's collection at the box office. Especially the decision by the Delhi government to shut its movie theatres till March 31 will take a huge toll on the film's overall collections. Hopefully, the film will manage to survive in other prominent cities.

(The above story first appeared on LatestLY on Mar 13, 2020 02:17 PM IST. For more news and updates on politics, world, sports, entertainment and lifestyle, log on to our website latestly.com).