Can Akshay Kumar do a Vijay? Or Ravi Teja? Ever since the Bollywood superstar announced Bell Bottom for a theatrical release on July 27, excitement is on the rise. Fans as well as industry watchers have applauded the move. 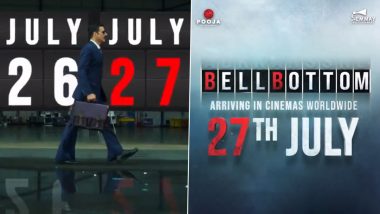 Can Akshay Kumar do a Vijay? Or Ravi Teja? Ever since the Bollywood superstar announced Bell Bottom for a theatrical release on July 27, excitement is on the rise. Fans as well as industry watchers have applauded the move. The hope that, pandemic practicalities permitting, Akshay's gesture will initiate the first step at box office normalcy for the Hindi film trade. Bell Bottom Actress Vaani Kapoor Reacts to Her Film With Akshay Kumar Finally Getting a Release.

The trade after all has maintained for a while now that, with vaccination in place and with the world cautiously opening up in the latest unlock phase, all it would take for the Hindi film trade to get going once again is one big hit. This, in turn, called for a film with the right entertainment quotient, pre-release hype and, most importantly, a star who doesn't have to try too hard to draw the crowds. Akshay Kumar’s Bell Bottom To Release In Theatres On July 27; The Actor Confirms (Watch Video).

Akshay's "Bell Bottom" is a retro spy thriller set in the 80s, is shot mostly in the UK, mixes sleek espionage action with pop patriotism drama, is reportedly based on a true story, and co-stars Vaani Kapoor, Huma Qureshi and Lara Dutta. The combo would seem instantly saleable, an all-out entertainer. Bollywood hopes the film has the same impact that Ravi Teja's "Krack" did for the Telugu film industry and Vijay's "Master" did for Tamil cinema in January, when big screen trade down South made a brave attempt to get back to business even as the first bid to unlock cinemas happened this year.

For the record, "Krack", made on a budget of around Rs 16 crore and released on January 9, managed over 60 crore in just about four weeks, after taking in a first weekend collection of around Rs 23 crore. The release of "Master", coinciding with Makar Sankranti (January 14), was an ambitious move, with the film rumoured to be budgeted at around Rs 125-135 crore. "Master" did spectacularly despite pandemic protocol in theatres and the audience being wary to venture out. The film grossed Rs 250 crore worldwide according to India Today.

Of course, subject to cinema halls opening, a few other Hindi films were lined up for a theatrical release in July. Before the second wave of Covid struck, "Shershaah" starring Sidharth Malhotra was announced for July 2. Ayushmann Khurrana was scheduled to return to theatres with "Chandigarh Kare Aashiqui" on July 9, as was the modest-budget comedy "14 Phere" featuring Vikrant Massey and Kriti Kharbanda. Sanjay Leela Bhansali's Alia Bhatt-starrer "Gangubai Kathiawadi" was planned for release after Akshay's "Bell Bottom", on August 30.

None of the above films that were listed as possible releases in July 2021 have officially confirmed release as of now, and no one in the trade wants to hazard a guess on whether these films will be pushed back again. Perhaps, the makers are apprehensive that theatrical business all over India might not open up sufficiently by the first half of July or, even if it did, the audience may not be convinced enough to venture into the halls.

At best, halls might open by July-end given the current situation (to understand the immediate situation, Maharashtra, one of the most important domestic markets for Bollywood films, recently said regular opening of cinemas would happen only in Level One zones while Level Two areas would see 50 per cent occupancy). On Akshay's "Bell Bottom", it is interesting to note the fact that July 27, his chosen date for release, is a Tuesday.

Which means Akshay and his battalion of producers (Vashu and Jackky Bhagnani, Deepshikha Deshmukh, Monisha Advani, Madhu Bhojwani and Nikkhil Advani) have given themselves a three-day headstart. This would be hoping to garner word of mouth over Tuesday, Wednesday and Thursday, before the actual weekend kicks in on Friday the 30th. For a film like "Bell Bottom", which is not a conventional mainstream entertainer, a bit of buzz would seem just the right thing to go for, in the time of uber-cautious unlock.

Akshay currently has half a dozen films lined up. Of these, "Bell Bottom", "Sooryavanshi", "Atrangi Re" and "Prithiviraj" were scheduled for a 2021 release. Rumours suggesting Akshay is keen to release "Sooryavanshi" on Gandhi Jayanti have neither been confirmed nor denied. Two other films of the superstar, "Bachchan Pandey" and "Ram Setu", are slated for next year, and Akshay has reportedly completed almost all shooting, except "Ram Setu".

A quick scan of that list tells you right away that Akshay's focus with his releases this year and the next is interestingly on all-out entertainment. Subject to pandemic realities, if "Bell Bottom" kickstarts the Bollywood theatrical trade on a positive note, it would certainly give Akshay an advantage over the other superstars. At a time when OTT has reaped rich in the absence of cinema business, Akshay's fellow superstar Salman Khan recently learnt the rough way with "Radhe" that the digital space doesn't care much about the power of traditional Bollywood superstardom. Akshay himself would be aware, too. He had dropped "Laxmii" on OTT last year and the impact was far from blockbuster.

(The above story first appeared on LatestLY on Jun 20, 2021 11:27 AM IST. For more news and updates on politics, world, sports, entertainment and lifestyle, log on to our website latestly.com).